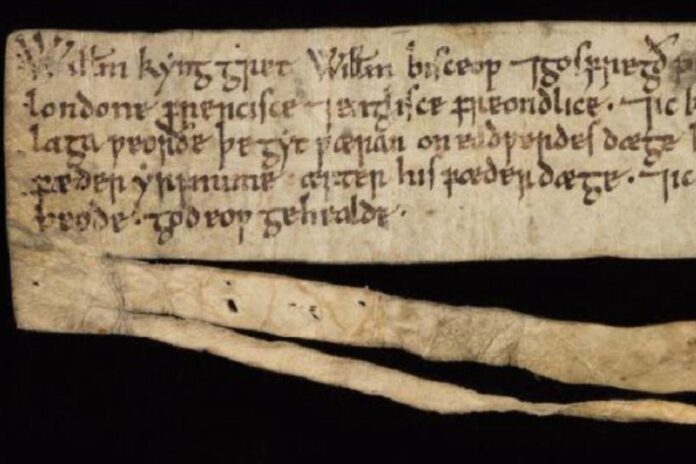 The William Charter, the oldest document held in the City of London Corporation’s extensive archives, will go on public display this month.

The William Charter was written on vellum (parchment) in Old English and measures just six inches by one-and-a-half inches. It comes complete with one of the earliest surviving seals from William the Conqueror’s reign.

The document will be displayed at the City of London Heritage Gallery at Guildhall Art Gallery from Saturday 24 September 2022 to Thursday 19 January 2023. The Gallery is open during the art gallery’s admission times (Monday to Sunday, 10.30am to 4pm, last admission 3.45pm) with free entry.

The William Charter is the earliest known royal or imperial document to guarantee the collective rights of the inhabitants of any town, granting nothing new to Londoners, but confirming the citizens’ rights and privileges, which were already in existence.

Translated into modern English, the Charter reads: “William the king, friendly salutes William the bishop and Godfrey the portreeve and all the burgesses within London both French and English. And I declare that I grant you to be all law-worthy, as you were in the days of King Edward; And I grant that every child shall be his father’s heir, after his father’s days; And I will not suffer any person to do you wrong; God keep you”.

City of London historians point out that one of the citizens’ primary concerns, as expressed by the words – “And I grant that every child shall be his father’s heir, after his father’s days” – was to ensure that their property handed down to the son and heir, rather than attracting the interest of the Crown.

Chair of the City of London Corporation’s Culture, Heritage, and Libraries Committee, Wendy Hyde, said: “We take our stewardship of these iconic documents seriously, preserving them for future generations, and it is always gratifying to see them being studied and admired for a precious few weeks or months.

“Our purpose-built Heritage Gallery at Guildhall Art Gallery is the ideal venue for displaying this small – but quite remarkable – piece of parchment, which comes from a fascinating period in the City’s history.”

The William Charter, which is one of over 100 royal charters held in the City of London Corporation’s archives, has been inscribed onto the UNESCO UK Memory of the World Register.