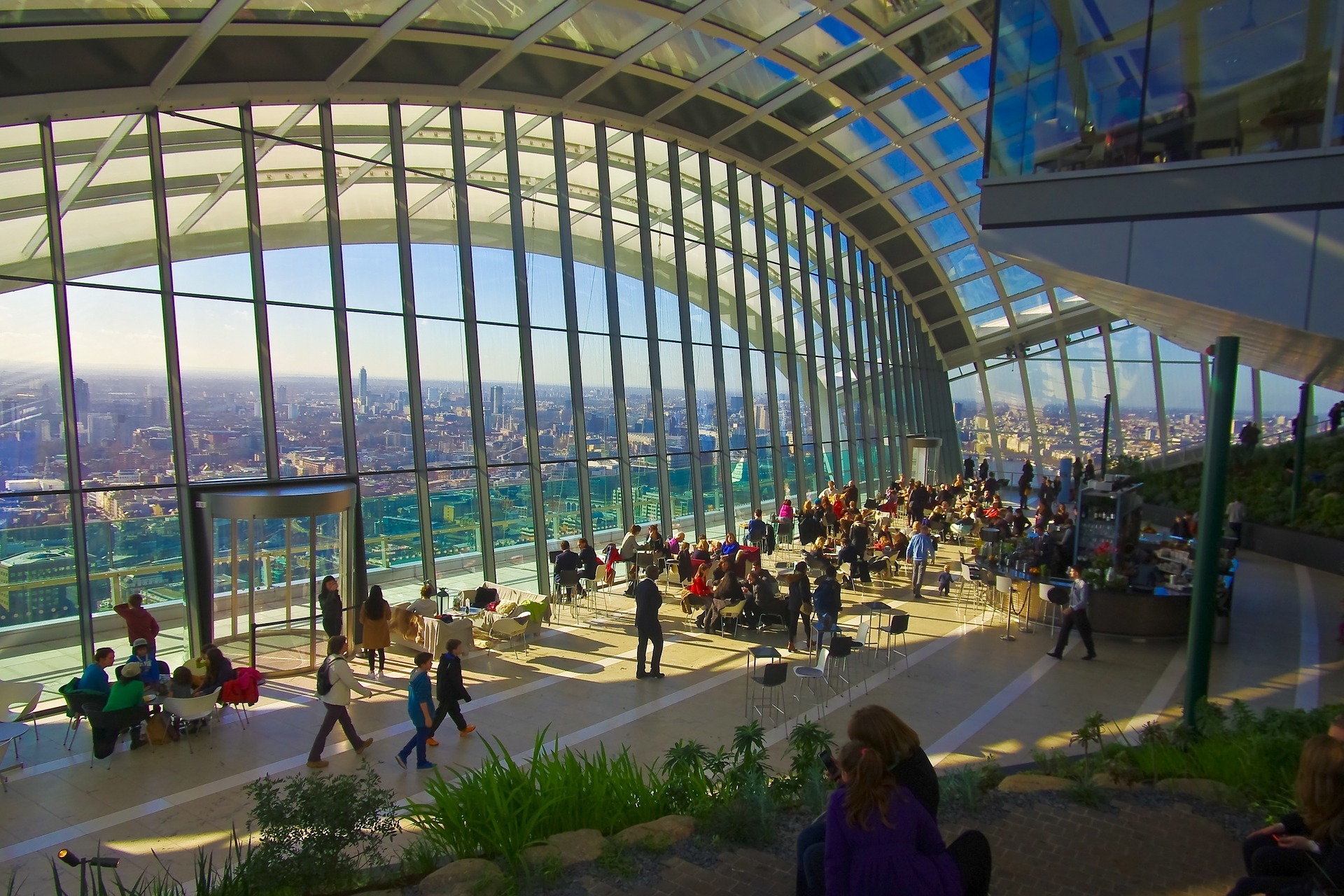 Skyscrapers in the City of London take design inspiration from everything, from medical equipment to cucumbers; love them, loathe them, or feel completely apathetic towards them, they continue to pop up in our ever-changing skyline, redefining it for generations to come.

Although built for a variety of purposes, ranging from high-rise hotels to air-borne apartments, the majority of the City’s ‘scrapers are built for office space, attracting some of the biggest international companies and brands to the heart of the capital.

They may not be for the faint hearted, but it is easy to see why these goliaths of the sky continue to cause a buzz.

The most modern are stunningly designed, environmentally conscious, and focussed on providing a positive experience for those up high and down on the ground.

And with London’s protected viewing corridors ensuring that designers need to get creative to ensure a coveted spot in the clouds, they’re only likely to get more obscure.

So, before we find ourselves discussing the pros and cons of the new ‘Y-Shaped Peeler’ building, here are the most wacky and neck-strain-inducing skyscrapers in the City of London today.

At 171.3m, 100 Bishopsgate could be considered unassuming in both name and stature; but as winner of the 2021 CTBUH Award for Best Tall Office Building, and put up for sale at an eye watering £1.8bn, it seems this 40-storey office tower is fast becoming one of the most iconic (and expensive) skyscrapers in the City of London. The shape shifting structure, with a parallelogram at its base and a rectangle at the top, has a tiny, seven storey neighbour that is part of the same development; but let’s keep it 100, it’s the big guy everyone’s talking about.

Contrary to its bingo moniker, ‘two little ducks’ Bishopsgate is anything but pint-sized. The new kid on the block holds the coveted title of ‘tallest building in the City’ at a whopping 278.2 metres tall. This innovatively designed behemoth features lifts run by AI, and was worked on by Formula 1 engineers and ex-military staff to create a design that prevents wind tunnels and eases traffic flow around the base of the building.

The name’s Tower. Broadgate Tower. And it’s got a licence to thrill James Bond fans, having been one of the key locations in the movie Skyfall. At 183m tall, it may not be the most imposing, but as a ‘Hollywood star’ and on the edge of buzzing Shoreditch, it could be argued that it’s one of the coolest skyscrapers in the City of London. In its day job, Broadgate Tower is an office building, and was completed in 2008 alongside its next door neighbour, 201 Bishopsgate. 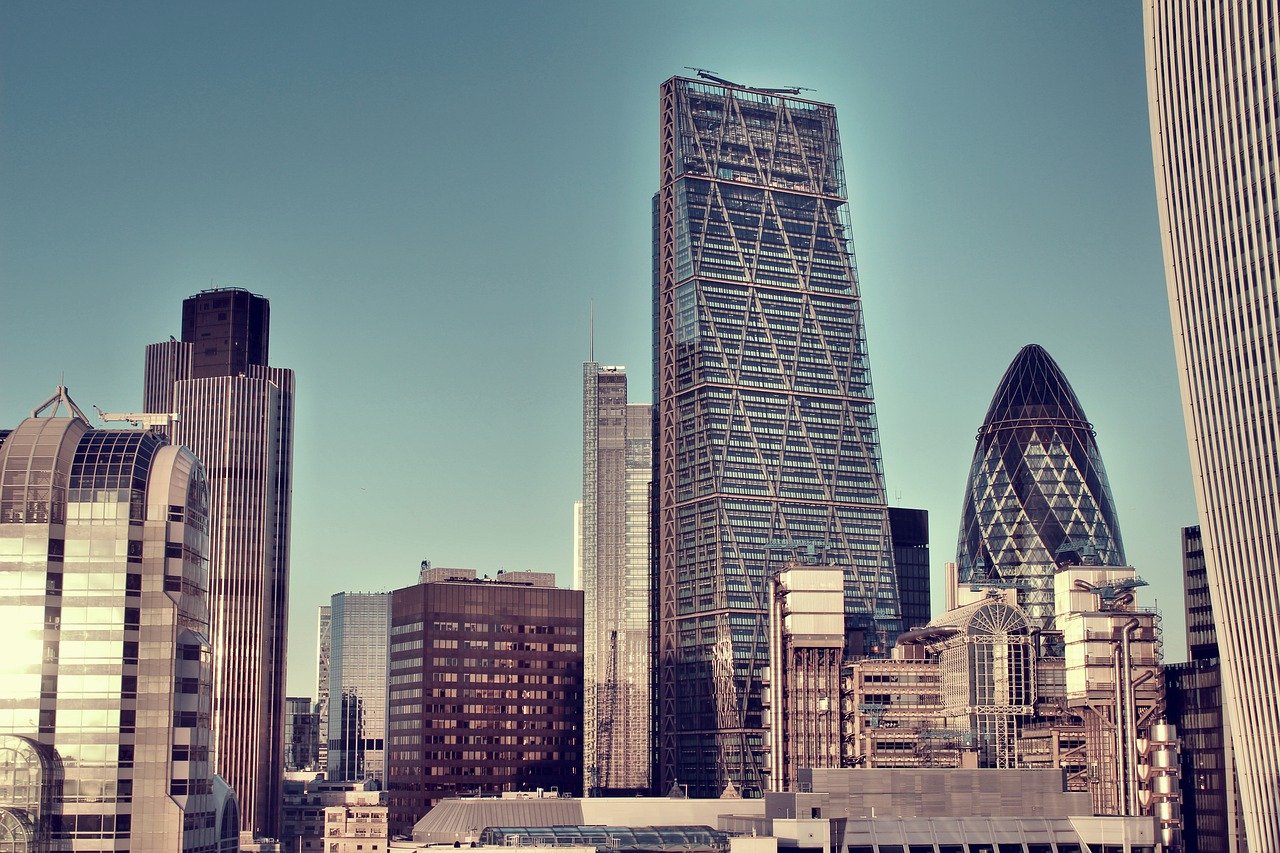 Another muenster structure from the City skyline kitchen is The Cheesegrater (aka 122 Leadenhall Street), nicknamed so because of it’s wedge-like shape, and it measures in at 224m. The building was designed with the tapered effect to allow for views of St Paul’s to be unhindered. These restrictions have resulted in Richard Rogers’ design becoming, as his company describes, a ‘positive addition to the London skyline’. 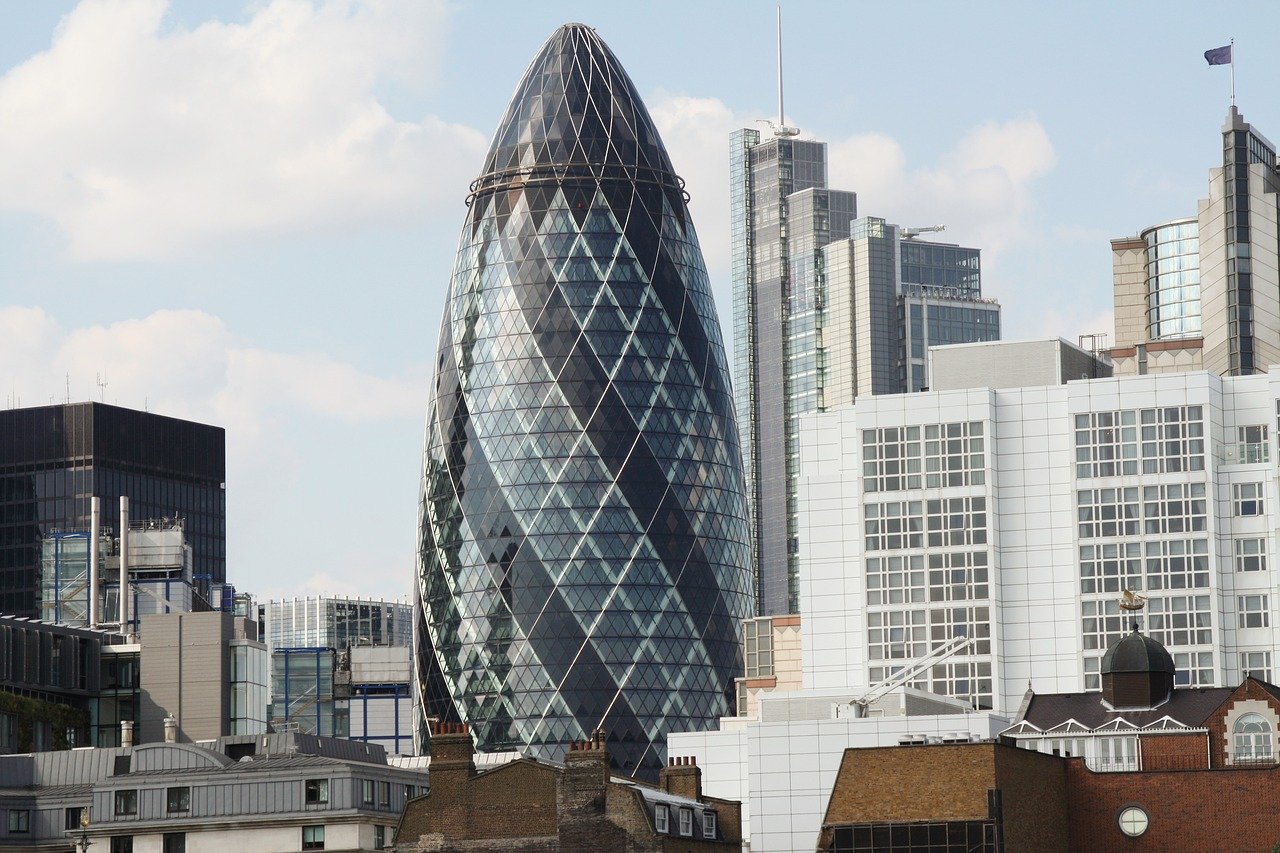 Nicknamed for its resemblance to the popular fermented cucumber, The Gherkin is undeniably one of the most iconic members of the London skyline. Also known as 30 St Mary Axe, the building stands at 180m tall, and is covered in five football pitches worth of glass. Whilst merely a humble office building, it certainly tickles the pickle of many film-makers, and has been featured in a number of blockbuster movies.

Shakespeare once asked, ‘What’s in a name?’, and to that the Heron Tower might answer, ‘Which one?’. Originally named after its owner, property developer Heron International, the second tallest building in the City is also known as Salesforce Tower, with the official title of 110 Bishopsgate. Measuring 230m, this Big Bird has nothing zoomorphic about it; although does have some connection to things that swim and fly, being the home of culinary giants Sushisamba and Duck and Waffle. 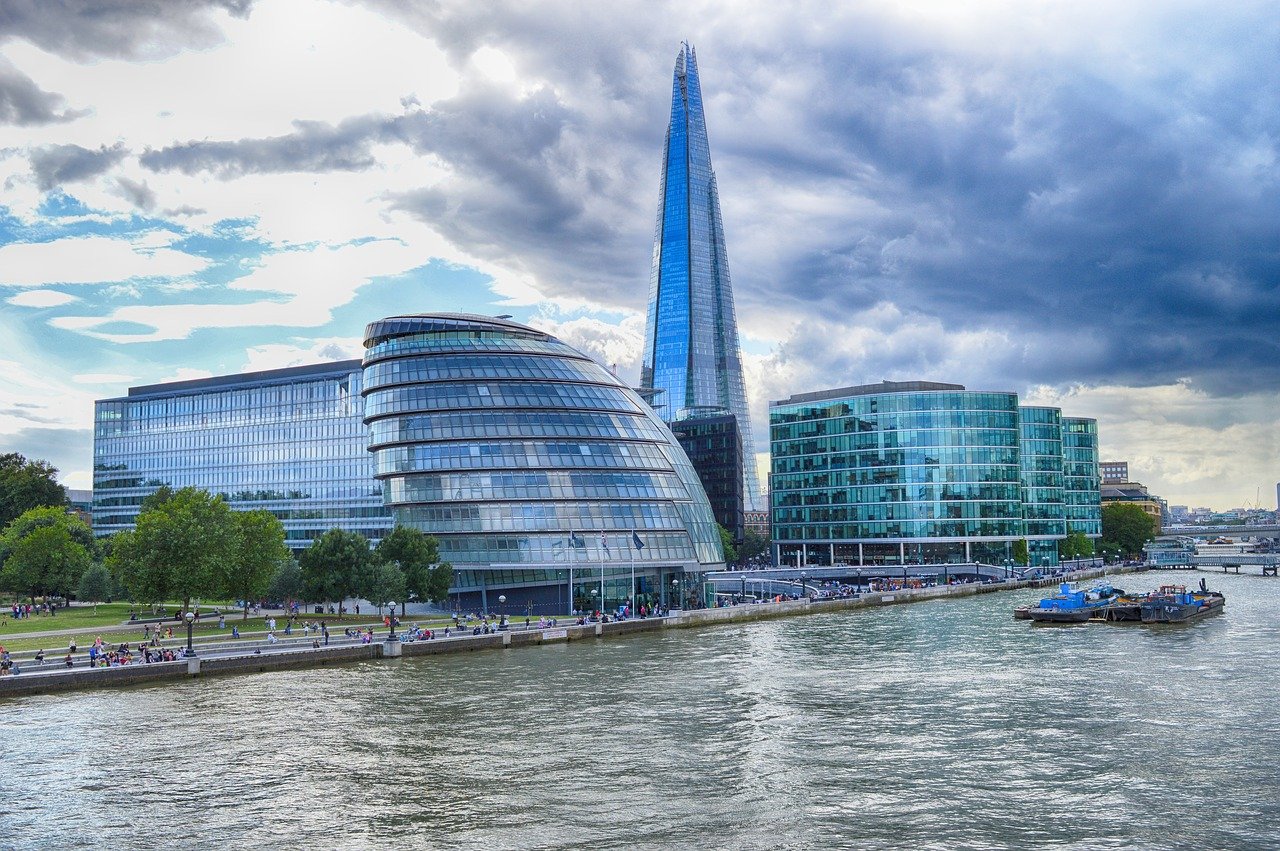 Arguably the most famous of London’s skyscrapers, the Shard is not only the tallest building in the UK, but at 309.6m tall, currently towers over all of Western Europe. Designed by Renzo Piano, and inspired by the spires of church steeples and the masts of sailing ships, the building got its name from critics describing it as a ‘shard of glass’ that would ruin London’s skyline. Clearly such criticism has not pierced its popularity, as it has received multiple accolades, and is considered to be the ’emblem’ of London’s skyline. 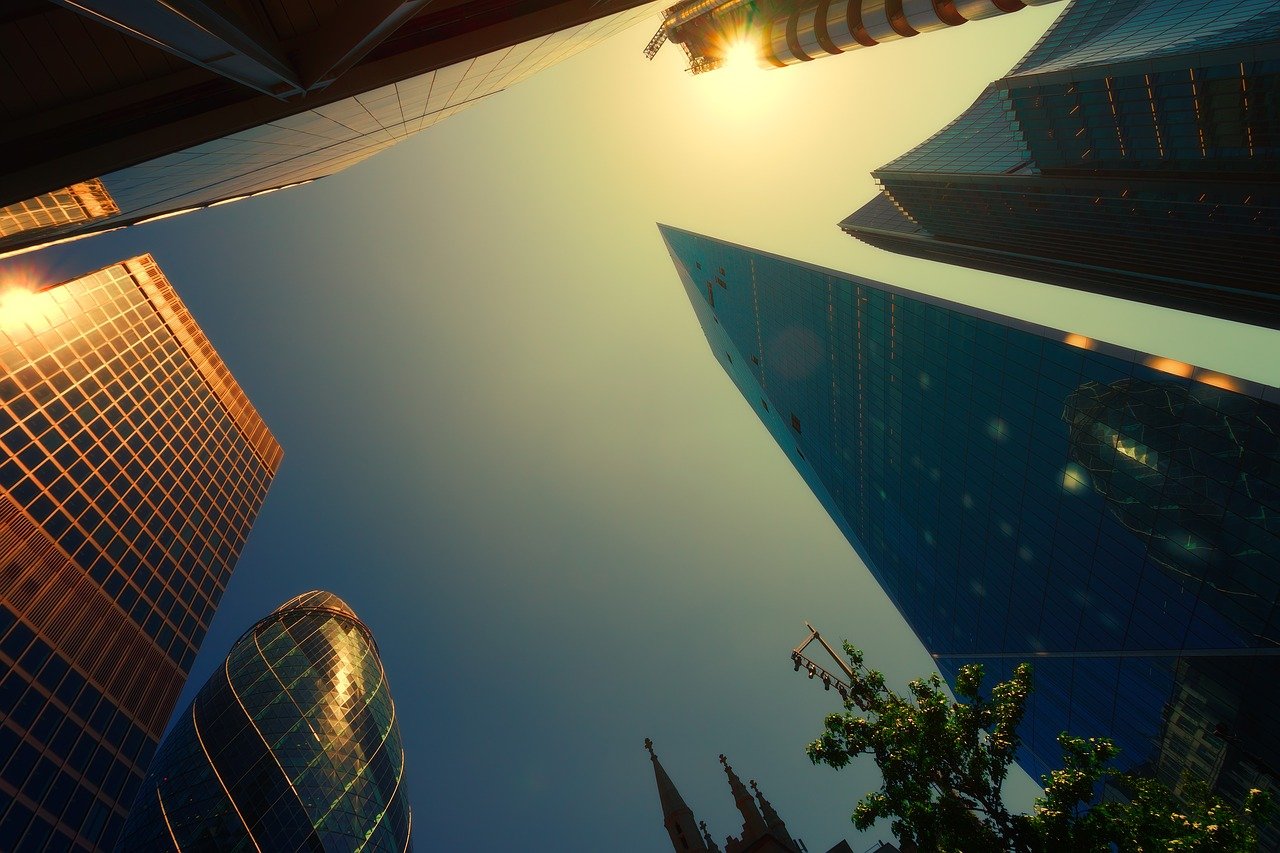 One of the sharpest looking skyscrapers in the City of London, The Scalpel gained its nickname from the FT back in 2012, which proved to be such a hit that it became the building’s official title. Designed by Kohn Pederson Fox, and standing at 190m tall, the building is another to be shaped by the tricky operation of keeping St Paul’s unobscured, but has easily sliced its way into the heart of the City Cluster, adding a sense of what KPF calls ‘urban drama’.

Originally known as the Natwest Tower, being built to house the bank’s international headquarters, Tower 42 was the first of the modern skyscrapers in the City of London. Once the tallest ‘scraper in the country at 183m, it now is a lowly 14th – but what it lacks in stature it makes up for in individuality, boasting a multi-media lighting system at its very top. The Tower 42 lights even have their own Instagram page, and beam across London each night to showcase their support for a variety of causes and events. 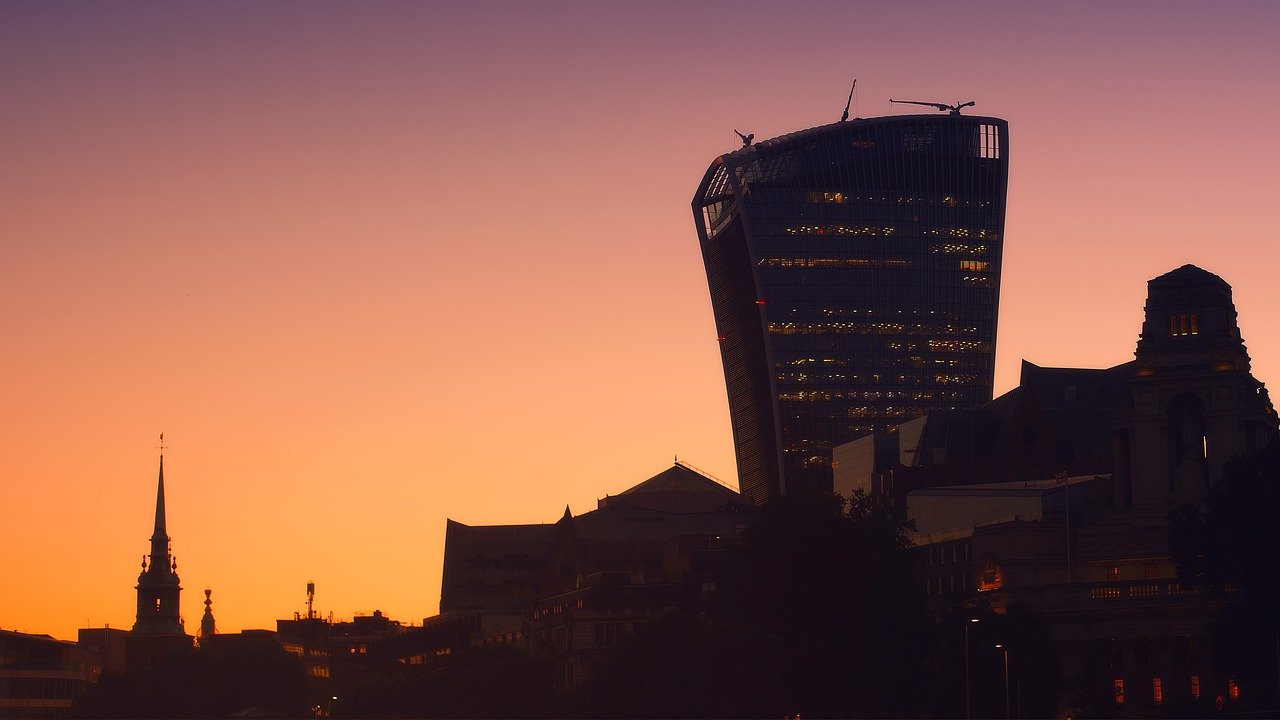 The Marmite of London’s skyscrapers, the 160m tall Walkie Talkie building had a rough beginning back in 2010. Before construction had even finished, the ‘Walkie Scorchie’ had caused quite the scandal, after light reflected from its façade caused a nearby car to melt and shop door mats to catch fire. Now, fitted with permanent sunshade and home to the rooftop Sky Garden, it has slightly redeemed itself; but was still awarded The Carbuncle Cup in 2015 for the worst new building in the UK.