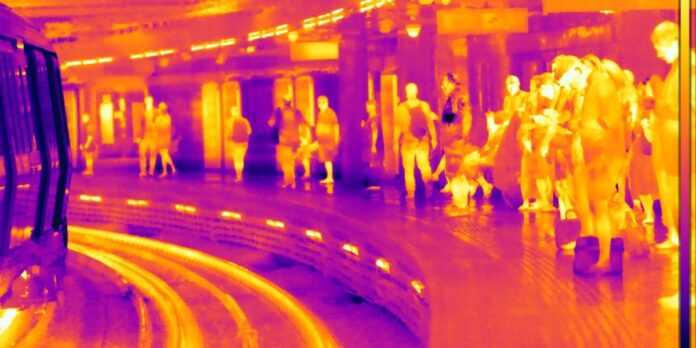 The City is a furnace right now. Temperatures above ground have hit around 34 degrees today but things get considerably worse as you head down into London’s Undergound network – which is not well equipped for hot weather like this.

In light of this, FLIR Systems have taken their thermal imaging cameras into the tubes to record all of the sweat. They’ve found dangerously hot temperatures inside London’s tube carriages and in the stations themselves.

The hottest readings came from the Central line (40°C) and the Bakerloo (42°C) while the DLR, which is mostly above ground measured in at 32°C. And it’s only going to get worse with the anticipated ‘heat dome’ and ‘heat black spot’ expected over the coming months.

And to make matters worse, Network Rail, which manages and owns the UK’s rail network, has put speed restrictions in place to prevent tracks from bucking under the hot weather.

Trains will run slower on most key routes such as those in and out of London Victoria, Blackfriars, East Croydon, Gatwick Airport and Brighton today and tomorrow.

And even while Transport for London (TfL) said it would work hard to keep London’s transport network running smoothly in the heat, it warned passengers that railway tracks could buckle or bend in the heat.

It may also introduce speed restrictions on some routes despite engineers carrying out thousands of hours of work to reduce the risk of tracks bending in the intensity of the heat.

Mark Evers, director of customer experience for London Underground, said: “We advise customers to ensure they have water with them when they travel in order to stay hydrated, offer a seat to those who may need it, and, if they feel ill, to contact a member of staff at the next station or speak to the bus driver.

“We might need to reduce the speed of our trains at some locations this week as a result of the hot weather. This may mean that your journeys take longer than usual.”