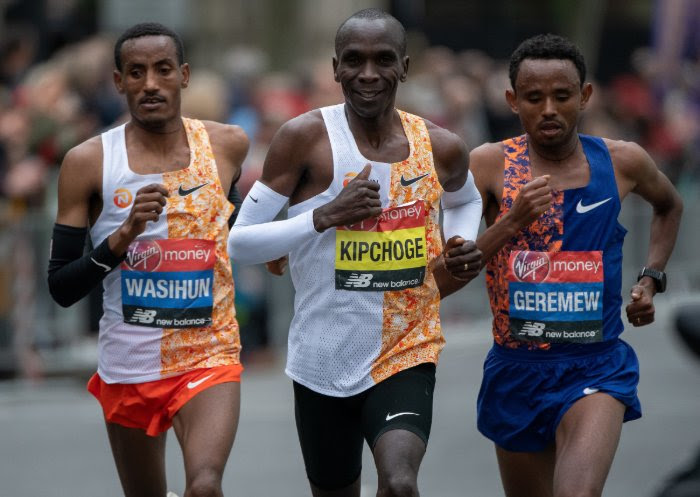 London Marathon organisers have confirmed the full fields for the elite men’s and women’s races on 4 October.

The elite men’s race – headlined by the greatest marathon runners in history, Eliud Kipchoge (KEN) and Kenenisa Bekele (ETH) – will include eight athletes who have run sub 2:05 marathons, including Mosinet Geremew (ETH) and Mule Wasihun (ETH) who were second and third respectively at the 2019 edition of the event.

Sisay Lemma (ETH), Tamirat Tola (ETH), Marius Kipserem (KEN) and Shura Kitata (ETH) are the other men to have run inside 2:05 while Sondre Nordstad Moen (NOR), who broke the European hour record in Norway earlier this month by running 21.132km, is also included.

The news that World Athletics will lift its suspension of the Olympic qualification system for marathon races from 1 September means there will also be a clutch of athletes racing with the ambition to achieve the Olympic standard of 2:11:30.

Sir Mo Farah will be a pacemaker for this group of Olympic hopefuls.

Farah, a four-time Olympic champion, said: “The London Marathon has been so important to me since I was a schoolboy and when they asked me to do this I thought it would be great to help. I am in good shape, I’ll be in London that week and it fits in with my training.

“I’ve been training here in Font Romeu with some of the British guys who are going for that Olympic qualifying time and they are good lads.

“I know just how special it is just to compete for your country at an Olympic Games and it would be great to help other athletes achieve this. With the current global situation and lack of races, the Virgin Money London Marathon in October is the best chance for athletes to run the Olympic qualifying time.”

Hugh Brasher, event director of the marathon, said: “This is the greatest Olympian in British track and field history coming to run as a pacemaker to help others achieve their dreams of making the Tokyo Olympic Games.

“It is a wonderful gesture of togetherness from Sir Mo and I’m sure his presence and support will inspire the athletes chasing that qualifying time on 4 October.”

At present only two British athletes other than Farah have run inside this time: Callum Hawkins, who has been pre-selected for the Olympic Games marathon, and Jonny Mellor who ran 2:10:03 in Seville in January. Farah himself has opted to run on the track at the Olympic Games.

Among the leading domestic women confirmed to race are Steph Twell, who ran a personal best (PB) of 2:26:40 in Frankfurt last year to go sixth on the British all-time rankings, and 2018 British marathon champion Lily Partridge.

Due to the Coronavirus pandemic, the elite races at the 2020 Virgin Money London Marathon will be held on a closed-loop circuit around St James’s Park in central London with the iconic finish on The Mall remaining the same as in previous years.

The races, which will also include a wheelchair race, will be held in a secure biosphere as has been the case with other major sporting events such as Test Cricket and Formula 1.

No spectators will be allowed on the road-side to watch. BBC Sport, however, is planning eight hours of live coverage of the event.

It will be The 40th Race in London Marathon history and the first to have elite-only races.

Those with a place in the mass-participation 2020 event will still have the chance to take part in The 40th Race by running the famous 26.2 mile marathon distance from home or anywhere in the world on the course of their choice.

All finishers will receive the coveted finisher medal and New Balance finisher T-shirt. General entries open on 26 August. In addition, all runners and charities will have the chance to defer their place to a future London Marathon – in 2021, 2022 or 2023.