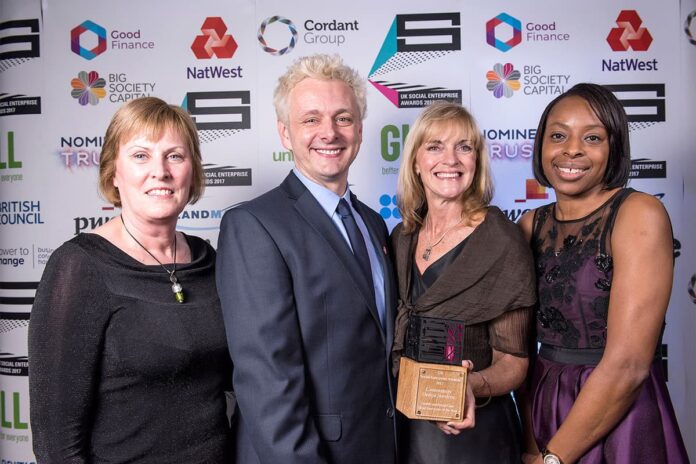 PETER HOLBROOK said social enterprises are a “force to be reckoned with” as the best and brightest took centre stage at the sector’s equivalent of the Oscars.

The annual Social Enterprise Awards set the standard for the UK’s 80,000 social enterprises striving to make a difference to communities across the nation and overseas.

The ceremony, held at the Royal Horticultural Halls in Westminster, was hosted by comedian Aisling Bea, who was joined on stage by SEUK patrons, actor Michael Sheen, and director and comedian Chris Addison.

“The many nominees and winners show us that you can put people and society before profit and be a successful business,” said Sheen.

“When they win, we all win. Tonight’s winners showcase just what the future of business looks like and it’s a real privilege to be part of their evening as Patron of Social Enterprise UK.”

The 2017 edition of the prizegiving featured two new accolades; the Transformative Community Business award, which recognises the huge contribution social enterprises make to their local communities; and the Tech for Good award, established to highlight how social enterprises are using modern technology
to benefit the people and areas they work with.

The night’s big winner, however, was Brighton-based firm ‘Here’, which scooped the Social Enterprise of the Year gong for creating health services and solutions shaped around the needs of clients.

Mr Holbrook, chief executive of Social Enterprise UK, said that the awards are a real testament to the “dynamism and diversity” of a sector with a growing influence.

“This year’s winners have included a social enterprise employing IT consultants who bring together the unique talents of people living with autism, coffee carts transforming the lives of those without a home, a film company opening up the creative industries to young people, and even a social enterprise dental service working in some of the UK’s most challenging neighbourhoods.

“Social enterprises are continuing to prove that they’re a force to be reckoned with, they’re creating solutions to some of the biggest challenges we face and showing how business can and should be done.”