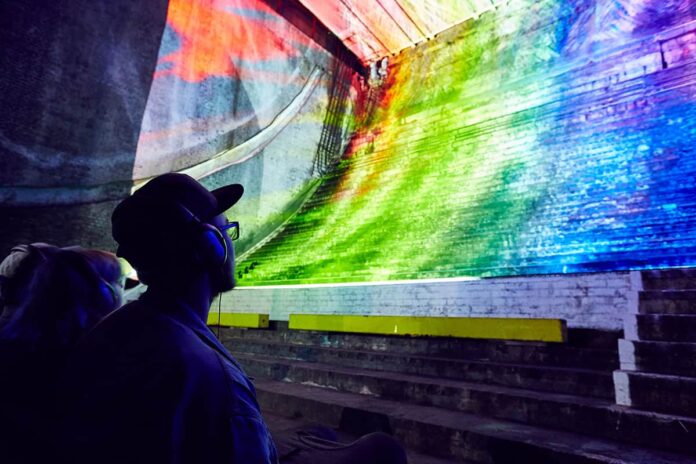 FROM Basquiat and Banksy to Simon Rattle and Roman artefacts, 2017 was a stand-out year for the Square Mile’s artistic institutions.

Add to these the announcement of a  ‘Culture Mile’ of street art, programmes and events winding its way between Farringdon and Smithfield and it would seem the City’s creative capital is on the up. Here are some of the highlights for 2018.

It was as good a year as any for the Barbican to announce a season dedicated to showcasing how arts reflect and effect change in the social and political landscapes; and that was before most of the Trumpisms, Britain’s general election, and the unravelling of sexual harassment in Hollywood. Throughout 2018, The Art of Change will present bold artistic responses to global issues ranging from feminism and sexuality through to climate change and human rights.

MUSIC / Benny Goodman: King of Swing
As far as moments of change go, Benny Goodman’s debut at Carnegie Hall on 16 January 1938 is widely recognised as one of the big ones. The King of Swing’s performance was a watershed moment in American music history as the first interracial concert on one of the greatest classical stages in the world. The Jazz at Lincoln Centre Orchestra will perform pieces straight from the set list of that historic evening, including material by Goodman’s protégées – Count Basie, Duke Ellington, George Gershwin, Fats Waller and Louis Prima – plus a new take on the mid-concert jam that brought the house down.
27 February, 8pm
Barbican Hall, Silk Street EC2Y 8DS

ART / Another Kind of Life: Photography on the Margins

Few artistic mediums have captured the essence of subcultures and countercultures quite like photography. Outsiders have long served as a natural subject for artists behind the lens – a relationship explored in the Barbican’s first blockbuster visual arts exhibition of 2018. Another Kind of Life: Photography on the Margins brings together more than 300 works from 20 photographers to demonstrate the role visual representation has had in shaping discourse on those marginalised from the mainstream; from crossdressing businessmen through to the seldom-seen Soviet hippies.
28 February to 27 May
Barbican Art Gallery, Silk Street EC2Y 8DS

THEATRE / The Town Hall Affair
The Wooster Group’s artful reimagining of the classic documentary Town Bloody Hall has done the rounds worldwide to almost universal acclaim before landing at the Barbican smack-bang in the middle of its Art of Change season. It is hard to imagine a more fitting addition to the line-up than this, a dramatic retelling of the raucous women’s liberation debate between author Norman Mailer and leading feminists like Germaine Greer and Diana Trilling that took place in Manhattan in 1971. Somewhat unsurprisingly, the themes remain relevant more than 45 years on.
21 to 24 June
Barbican Theatre, Silk Street EC2Y 8DS

The Museum continues its City Now City Future season into the spring with a fresh focus on the future, taking the hypothetical scenarios of artists, designers and scientists and turning it into a picture of reality. But there is also one foot firmly planted in the past with exhibitions celebrating the centenary of the Suffragette movement and 150-year anniversary of Smithfield Market.
Museum of London, 150 London Wall EC2

What will the future look like? Artists, scientists, architects and designers have been given carte blanche to go big on their predictions for climate change, the future of work, everyday life, politics and cityscapes for London Visions’ series of video installations, games and architectural narratives. A London flooded by rising sea levels, skyscrapers so tall they can house an entire city block, drones projecting the private lives of those living on a council estate for all to see; this latest addition to the City Now City Future exhibit is far out, but it might not be all that far off.
19 January to 15 April

Ahead of its big move to West Smithfield in 2022, the Museum of London has teamed up with the Smithfield Market Tenants’ Association to throw its own ‘welcome to the neighbourhood’ party in celebration of the 150th anniversary of London’s most iconic meat market. The August Bank Holiday weekend will see a large-scale street party reminiscent of the old St Bartholomew’s Fair, featuring food, music, entertainment and historic reenactments on a site, which has played host to a market in some form or another for centuries.
27 August

In February 1918, after over half a century of campaigning, a bill was passed that gave the first women the right to vote in the UK. The Museum of London commemorates the centenary of the Suffragette movement by examining the lives of some of its key figures who embodied the controversial direct action ‘deeds not words’ motto that led to the arrest of more than 1,000 women.

Among those featured include Emily ‘Kitty’ Willoughby Marshall, who was arrested six times and did three stints in Holloway Women’s Prison, the first for throwing a potato at the residence of then Home Secretary Winston Churchill. Her comrades in the exhibition include Janie Terrero, who went on hunger strike twice during her four-month stint at Holloway and was force-fed until the end of her sentence, and Winefriede Mary Rix, who got two months hard labour for smashing a window at the War Office.
2 February to 6 January 2019

THE Guildhall School continues a packed performance schedule into 2018 with a stellar line-up of music, theatre and stage design that showcase the talent of its stellar alumnae, as well as current students and stars of tomorrow.

MUSIC / Guildhall Symphony Orchestra
The orchestra takes to the stage for a special performance under conductor Ben Gernon, a Guildhall alumnus and principal guest conductor of the BBC Philharmonic Orchestra, one of the youngest to have held the title. Ben will lead the orchestra in Anna Clyne’s This Midnight Hour, Tchaikovsky’s tragic Last Symphony as well as soloist Ionel Manciu through Shostakovich’s Violin Concerto No.1.
14 March
Barbican Hall, Silk Street EC2Y 8DS

Poulenc’s masterpiece follows the story of Blanche de la Force, a young and shy aristocrat who, against the wishes of her family, joins the Carmelite order of nuns. In the monastery, Blanche meets Constance, a lively peasant girl who makes a shocking discovery. Conductor Dominic Wheeler and director Martin Lloyd-Evans will take audiences on a journey of faith, redemption and sacrifice set against the turbulence of the French Revolution.
26 February, 2 and 5 March
Silk Street Theatre EC2Y 8DS

VIDEO INSTALLATION / Guildhall School at Tower Bridge
Following the success of Terra Incognita – Here be Dragons in February 2017, the Guildhall School’s video design artists take their turn to transform Tower Bridge’s bascule chambers with a series of intimate, immersive light and sound installations in the hidden bowels of one of London’s most iconic structures.
23 to 25 March
Tower Bridge Bascule Chamber, Tower Bridge Road SE1 2UP