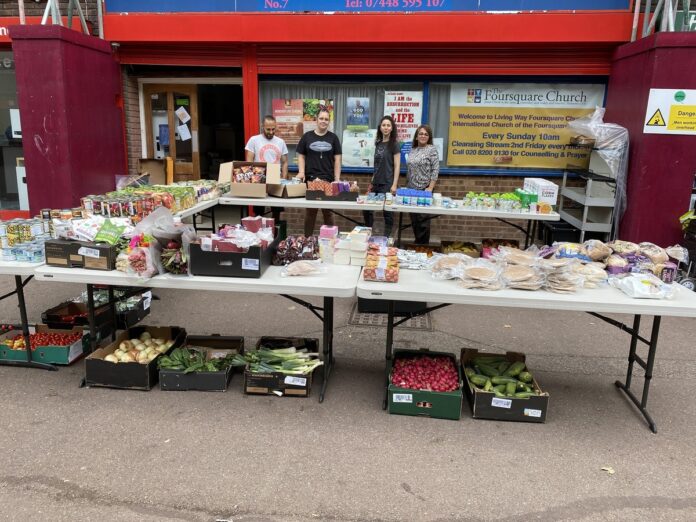 Parents using a North London foodbank are having to rush their young children to A&E with scurvy symptoms, as they are not able to afford fruit and vegetables.

Five-year-old children, with symptoms such as inflamed cheeks, have been seen queuing with their parents for up to four hours at Barnet Foodshare in Colindale.

Retired nurse Hope Yoloye who manages the foodbank told the Local Democracy Reporting Service queues are beginning to build up outside the charity’s store and she is seeing more sick children as the cost of living crisis kicks in.

Hope, who has lived on Graham Park Estate for 31 years, said: “People are always waiting. It’s just heartbreaking. When I get there at around 10am there are at least 30 people.

“By the time we have finished at 2pm at least 150 people have taken what they need. If someone is hungry and desperate they will do anything.”

The 71-year-old added: “Malnutrition is a cause of scurvy. [We saw cases] before but it’s much more common now. We have to advise them to go to A&E or the doctors sometimes.”

Scurvy is caused by a vitamin C deficiency and if it is not treated it can lead to exhaustion, bleeding, pain in the limbs and even teeth loss.

The Barnet Foodshare was first set up on Graham Park Estate 10 years ago. At first organisers would buy meat from Spitalfields market and fish from the London docklands and give it to north Londoners at a price they could afford.

Now the foodbank collects surplus items from local shops and cooks meals for residents. The foodbank itself has also been under threat recently as the rising cost of fuel has impacted volunteer drivers.

But with the help of funding from the City of London Corporation’s charity City Bridge Trust, the foodbank has enough money to stay open for two years.

City Bridge Trust Chairman Giles Shilson said: “The cost of living crisis and the impact of Covid means that more and more people are reliant on services like Barnet Foodshare to put food on the table for themselves and their families.

“This funding will ensure Living Way, which has a long-standing and deeply rooted role in the local community, can continue to make a life-changing difference to the people it serves.”

Hope added: “The demand for the Foodshare service is phenomenal – it’s just mind-blowing. Because of Covid, there are people that were already on a low income or no income who are really suffering.

“I’ve been using my car to collect food but I’m getting older and for our volunteers, it’s getting harder because the price of fuel keeps going up. Without this funding, we would have to stop and it would mean people would remain in food poverty.”