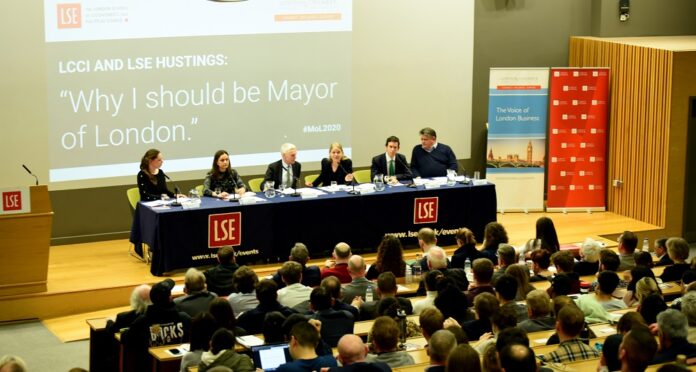 Candidates pitched their policies and sparred on stage ahead of the London mayoral election.

London will elect a new mayor on 7 May and the Local Democracy Service was at the hustings to catch every clap, heckle, and boo.

Here are three big takeaways from the evening, which was hosted by the London School of Economics (LSE) and the London Chamber of Commerce & Industry.

Sadiq Khan and Shaun Bailey didn’t show up
The most notable feature of these hustings was the absence of the two candidates leading the polls.

The latest survey by YouGov and Queen Mary University – now a little out of date from November – gave current Mayor Sadiq Khan a comfortable lead on 45%, with Conservative Shaun Bailey on 23%.

New entrant Rory Stewart snapped up 13% of the vote, with Liberal Democrat Siobhan Benita on 8% and Green Sian Berry on 7%. But neither Mr Khan nor Mr Bailey were at the event.

They were represented instead by Clare Coghill, leader of Waltham Forest Council for Labour, and Stephen Greenhalgh, former Deputy Mayor for Policing under Boris Johnson for the Conservatives.

There was palpable frustration from the other candidates. Ms Benita said she didn’t “believe” that the Mayor was too busy to attend, and claimed Mr Bailey had dropped out because Mr Khan wasn’t on the stage.

She said candidates should be given empty chair treatment in future if they didn’t turn up.

“The reason I went into politics was because I think our two main parties are increasingly dysfunctional,” she said.

“If they can’t be bothered to turn up to this event then I don’t think anyone should vote for them.”

Ms Coghill said the Mayor was “very sorry” he couldn’t attend and hoped she’d be an “adequate substitute in the circumstances” – but she later admitted that as a local government leader she didn’t have expertise on all the topics discussed.

For his part, Mr Greenhalgh said he “didn’t have a briefing” on some aspects of Shaun Bailey’s policy – leading Mr Stewart to claim stand-ins shouldn’t be allowed to speak if they don’t have the facts. 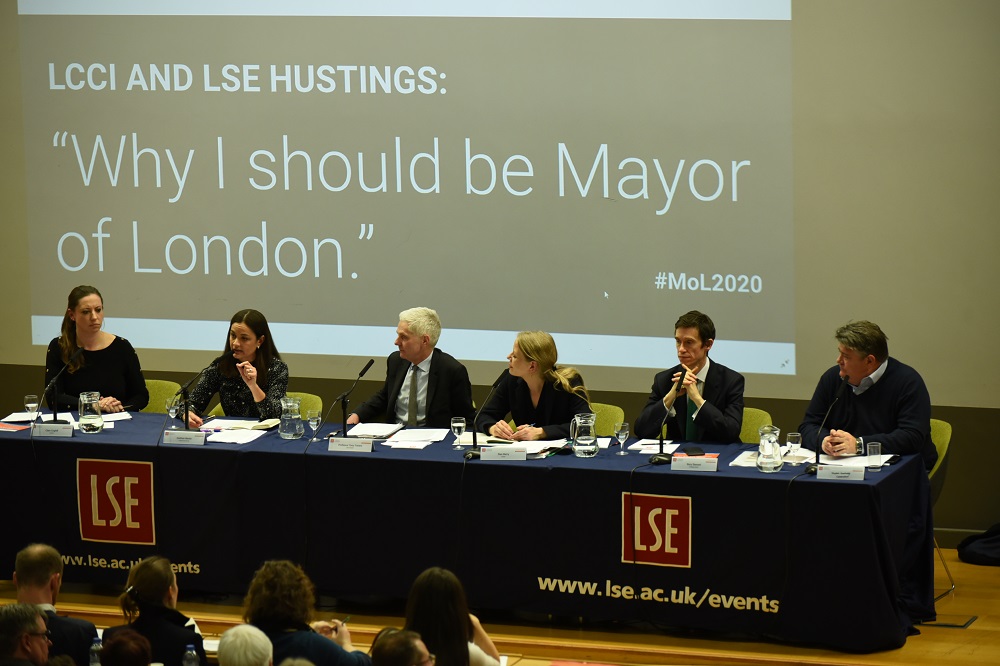 Violent crime remains top of the agenda
London had more homicides in 2019 than any year for more than a decade, and over 15,000 knife offences.

The Mayor of London is responsible for the Met, setting the strategy for policing in the capital – but last night, an eloquent question from the floor pushed the issue further.

An LSE student asked what each candidate would do beyond the “reactionary” drive to recruit more police.

He claimed this approach “trivialises the issue” and shows candidates are “not actually looking at the causes of crime” – and his question got one of the biggest claps of the night.

She praised the Mayor’s long-term response – investing in youth services and taking a “public health” approach to violence – arguing there is “no quick fix” to the problem.

But Ms Benita said politicians “have to be more angry” about young people dying on the streets of the capital.

She promised a London-wide youth service, and aims to end permanent school exclusions in the city.

The Lib Dem also wants to legalise cannabis in the capital, to take power away from violent drugs gangs – claiming “that overnight it would be the single biggest thing to keep our young people safe”.

Ms Berry said she was concerned that stop and search was “massively increasing” under the current Mayor – highlighting the use of Section 60 orders, which allow police to search anyone in an area without suspicion.

She said it breaks down trust in the police, and is “brewing up a recipe for disaster”.

But Mr Greenhalgh said a “massive increase in the number of gang members” and “widening of drug supply” had contributed significantly to rising crime.

He said: “With stop-and-search, we know that if it’s done properly, with respect that it works as a strategy to take knives off the street – and I think we need a Mayor who’s brave enough to do the things that work.”

There were groans and boos from the audience, and the loudest heckle of the night – “can’t do it with respect”.

Mr Stewart said as an independent he would consider both policing and the root causes of crime.

“On this issue of knife crime we get stuck into a very classic black and white stand off between the right and the left,” he claimed.

The independent is promising to double local police in London, but said he’d also work to build up youth services and give young people more opportunities. 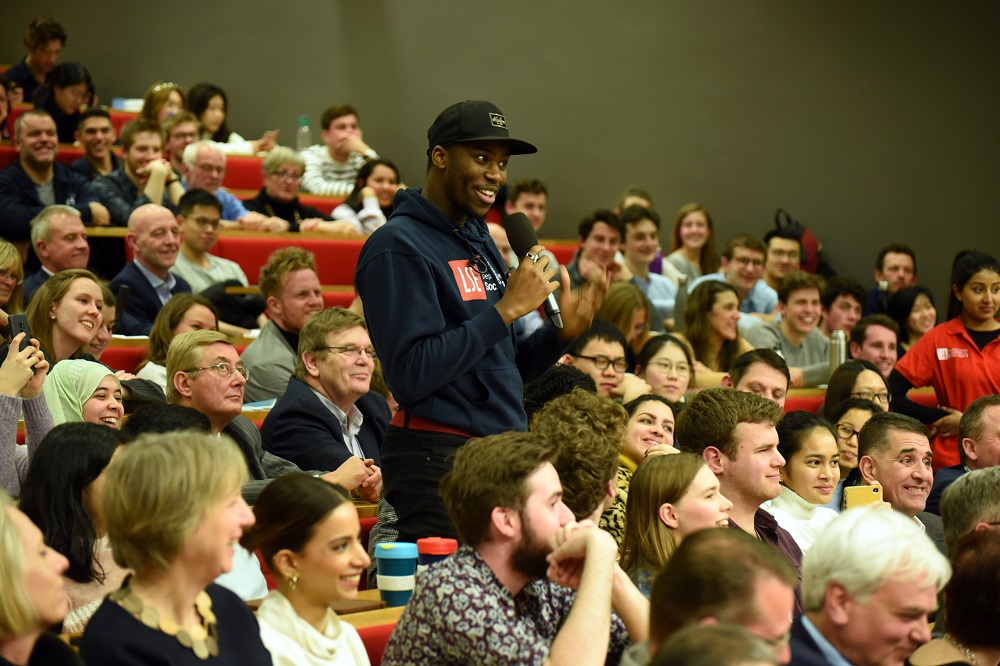 There might be another fare freeze – but would it work?
Transport is among the key responsibilities of the Mayor, and all the candidates were keen to show they’d build a network for all Londoners.

During Mr Khan’s mayoralty, his fare freeze has dominated debate – the policy has held pay-as-you-go fares at 2016 rates, which the Mayor says makes travel more affordable for Londoners.

But critics say many commuters use annual travel cards, which have risen in price, so tourists are more likely to benefit than locals.

Some also claim the lack of revenue from higher fares has slowed investment in new TfL services.

Mr Khan hasn’t confirmed if he’d raise fares during a second term – but this year’s TfL business plan is based on an inflation plus 1% rise.

So Ms Coghill’s claim that the Mayor would “absolutely” maintain the fare freeze if re-elected was the surprise of the night.

But is she right? Mr Stewart said the “small print” of TfL’s business plan showed otherwise.

He claimed the Mayor would have to raise fares because he has “massively mismanaged the funds of TfL”.

The independent said he’d use ‘smart pricing’ – as seen in Singapore – to vary fares based on income, and time of travel.

Ms Berry said she’d reduce the number of zones on the network, working towards a flat fare for public transport across the capital.

But Ms Benita said it was “irresponsible” to suggest the fare freeze could continue.

For his part, Mr Greenhalgh admitted he didn’t know Mr Bailey’s policy – despite the Conservative candidate having publicly backed a fare rise in the past, as Ms Benita pointed out.

“I think I know Shaun’s policies better than his representative does,” she said – to laughter from the audience.