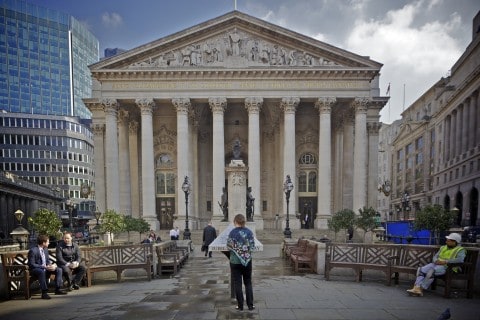 A drug-abusing thug threatened a Royal Exchange worker with a knife before fleeing with designer goods worth £1,700, a court has been told.

Sahid Dumbuya, 26, of Sidmouth Mews, was jailed for more than three years after pleading guilty to robbery and fraud charges, as well as possession of a weapon.

The harrowing ordeal took place shortly after 5pm on 24 May this year when Dumbuya walked into a store at the City’s luxury shopping destination.

He browsed a number of items before taking a bag, scarf and a pair of sunglasses, worth close to £2,000, to the till.

The bank card he used, which belonged to a woman whose card was stolen earlier in the year, was declined, at which point Dumbuya pulled a knife out of a carrier bag by his feet and brandished it at a cashier, before running out of the store.

Officers were flagged down and pursued him, and Dumbuya was eventually stopped by a member of the public.

As he was arrested, Dumbuya was seen dropping the knife, and was discovered to be in possession of a stun gun, as well as the stolen bag and sunglasses.

A search of his house uncovered another bank card belonging to the same woman, four mobile phones, and 11 wraps of cocaine.

Upon interview, Dumbuya told officers he carried out the robbery to repay a debt to an associate, stating he only intended to use the knife for intimidation, and that the Taser was for self-defence purposes, and was not charged.

In addition, he was recalled to prison for breaching the conditions of an extended period of licence he received in 2010 for unrelated offences.

Detective Constable Darren Reason, from City of London Police CID, said the member of staff had understandably been left shaken by what took place.

He added: “Dumbuya is now behind bars where he can reflect on his actions, and this case serves as a warning to those involved in this type of criminality that the City of London Police take robberies extremely serious and will do everything in our power to bring offenders before the courts.”