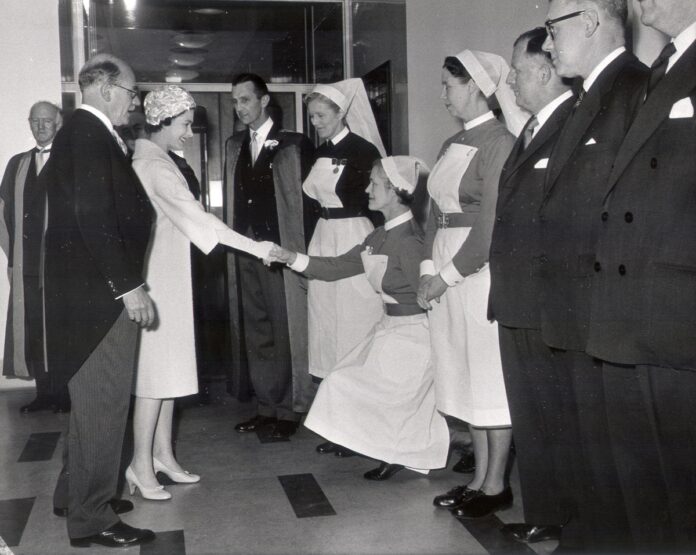 Last week our nation came together with people across the world to celebrate the Queen’s Platinum Jubilee, a moment steeped in history as Her Majesty became the first British Monarch to celebrate 70 years of service.

Recognition of service and devoting one’s life to serving others is a theme which feels particularly poignant, as we also approach St Bartholomew’s Hospital’s 900th anniversary next year.

Over the course of our history, thousands of doctors, nurses and support staff have walked the hospital’s corridors, committed to serving the east London community. What better time could there be to reflect on the special link between the Monarchy and St Bartholomew’s Hospital, bringing together our shared legacy and history of serving the British public?

Founded in 1123 by the monk Rahere, formerly a courtier of Henry I, the hospital has seen many reigning monarchs during its time – indeed, it owes its very survival to Henry VIII, who granted the Charter returning St Bartholomew’s Hospital back to the City.

We also should not forget that the succession of the monarchy has been inextricably linked to the development of maternity care, from medieval witchcraft to effective medical and surgical treatments over 900 years – some of which are directly connected to St Bartholomew’s.

Added to this, historically, the hospital’s proximity to the Tower of London as well as The Barber-Surgeons, and Apothecaries Livery Companies, has meant that many staff served as physicians to the members of the Royal Family. These included William Harvey, Physician to Charles I and discoverer of circulation of the blood. The first Warden of the Medical School, James Paget, was also Serjeant-Surgeon to Queen Victoria.

The connection between the Monarchy and St Bartholomew’s has continued into the modern era. The Duke of Gloucester is President of St Bartholomew’s and The Queen is Patron of both Bart’s and The Royal London hospitals. Many members of the Royal Family have visited the City’s hospitals to celebrate milestones.

A visit that was particularly special to me was that of Her Majesty the Queen in 1973 to celebrate the 850th anniversary of the hospital early in my career as a junior doctor. This was just one of many celebratory events and I am sure the scale and range of events in 2023, will be more than matched for the hospital’s 900th birthday.

HRH The Prince of Wales, who is Patron of the Barts Heritage Trust, formed to restore the historic Grade I listed buildings, paid a visit in 2021. Queen Elizabeth II has made many visits to the hospitals within Barts Health NHS Trust. Most recently, she attended a Covid-style virtual video-link, speaking from Windsor Castle to staff and patients at the opening of The Royal London’s Queen Elizabeth Unit.

On the anniversary of the COVID lockdown she thanked staff with a bouquet of flowers, delivered with a note paying tribute to “the immeasurable service of those who have supported us all over the last year”.

The Royal Family’s commitment to raising the profile of the UK’s healthcare workers and support staff remains unwavering. As Britain’s oldest working hospital, we look forward in this Jubilee Week to honouring the nation’s longest serving monarch, and to marking our own historic milestone in 2023.