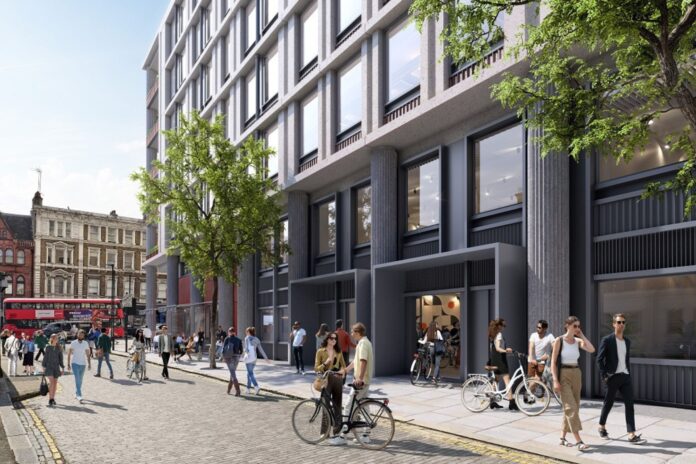 An “iconic” but controversial building which stands at the gateway to the Angel shopping and business area will be replaced with a greener office block which opponents fear “lacks ambition” and is “anywhere architecture”.

The plans see the post modern stone facade replaced with glass fronts and two new storeys inside to provide more office space and room for shops and a cafe at the ground floor.

There will also be a new home for the pub on the corner of Torrens Street and City Road.

The Twentieth Century Society and Save Britain’s Heritage said the building with its Italianate tower echoing a cupola opposite on Islington High Street should be kept as an example of post-modern late 1980s architecture.

However Islington’s planning department said they compared it with iconic buildings of the time which were listed by English Heritage such as Number 1 Poultry in the City of London and the Cambridge Judge Business School.

They said: “we have found it wanting by comparison. It simply does not possess the extraordinary qualities of those post modern buildings deemed eligible for listing by experts.” They described the details as “clumsy and clumpy.”

Eric Sorensen of the Islington Association said the new design at such a prominent gateway to the Angel business and shopping area was lacking in ambition.

He said the proposal “is typical of what has been called anywhere architecture.”

He welcomed changes to the design after consultation with residents and neighbours however he said: “The proposal remains lacking in ambition, without the distinction or status that such a prominent site deserves. ”

He added: “The bulk of the proposed building is substantially greater than the existing, the proposed facades are anonymous, without variety or hierarchy and there is very little activity or engagement at street level despite its significant High Street setting.” 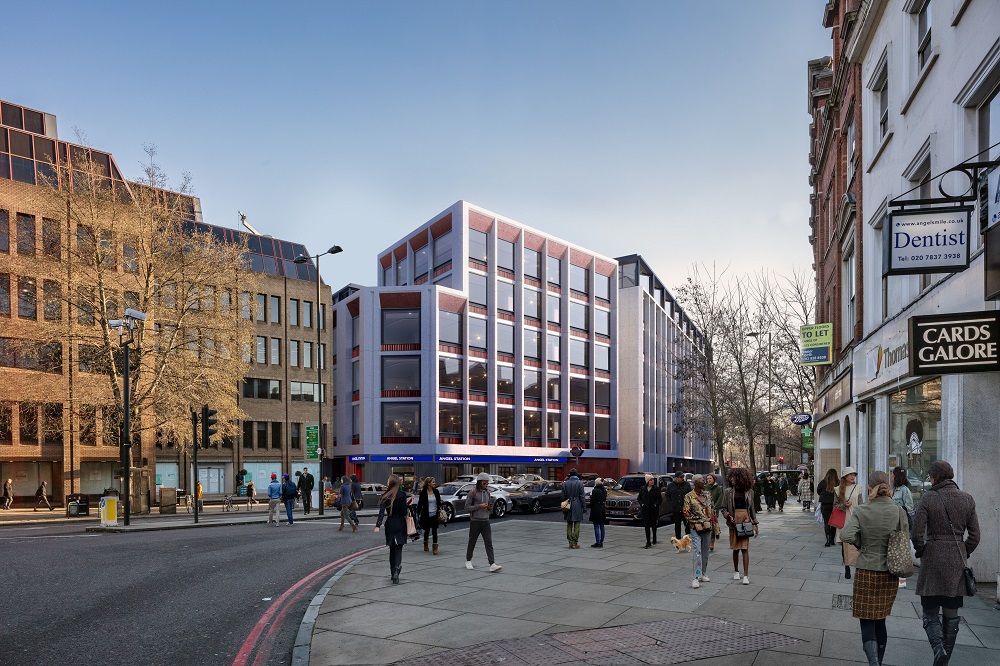 Residents from Duncan Terrace asked for the decision to be deferred so they could take legal action and consider their options such as a judicial review.

They said they feared the tall building would overlook their homes, affect their privacy and asked for controls on noise.

One of them Richard Dodson said he feared it would overlook his garden and impact on residents.

Planning officer Stefan Sanctuary said the terrace is more than 18m away and loss of privacy is not normally considered.

Michael Foster Smith for the applicants real estate company Tishman Speyer which paid £86m for the building last year said: “The top floor is set back on height and has been designed with residents in mind.”

He said the light impact on Duncan Terrace had been tested as “this is a key consideration for us “. He said there will be limits to the hours the terraces will be used.

Foster Smith said: “We are proud of the scheme and its design and sustainability.

“We think it is something Islington should be proud of.”

Councillor Tricia Clarke said the climate emergency highlighted by the summer’s extreme temperatures meant buildings have to be efficient.

“You have a chance to really put forward a design that will really adapt to climate change. I don’t really see that.”

She wanted more details on the use of grey water and energy use.

The developer said the glass would optimise heat in the winter and so windows could open in the summer, reducing reliance on air conditioning.

It would also cut water use by 50% with tanks and water from showers used to flush toilets.

They said it was “at the forefront of what we are doing with buildings in London.”

Councillor Paul Convery recalled that the current building was seen as “controversial” in 1988 when plans were considered.

“This modern style was not very popular.”

He said the present building was “distinctive and has become a landmark building.”

However, he added: “This is not a very good building”.

Cllr Convery said: It’s true that what is being proposed by way of replacement the words bland and anonymous have been used – there’s some truth in that. It’s a fairly functional building.”

He added the sustainability of new building was “much better”.

The current building was criticised for poor walkways through the block.

Cllr Convery said “it is an incredibly hostile building” for pedestrians who walk past a ventilation shaft and a blank wall at street level.

Councillors wanted assurance about the lighting and access to the new block. The path is likely to be open during office hours.

The planning committee approved the scheme.