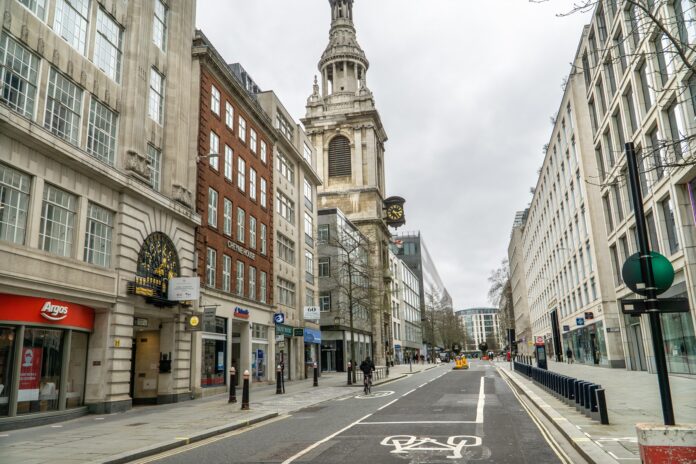 The Pedestrian Priority Streets scheme could become permanent in the City of London.

The pedestrian-friendly changes were introduced in 2020 to enable social distancing during lockdown but are now being considered as a potential permanent option.

The Pedestrian Priority Streets scheme covers wider pavements, seating and greenery and two-way cycle lanes, with traffic restrictions on streets in the Cheapside and Bank area.

Residents, workers and visitors to the City of London can get involved by giving their views on the street changes.

People have until Monday December 12 to have their say and help determine whether the changes should be made permanent by leaving feedback on the City of London website.

The proposals include retaining changes on King Street, Threadneedle Street and Broad Street with one-way motor traffic and two-way cycle lanes as well as widening the footway.

Old Jewry would remain traffic-free at its junction with Cheapside; Cheapside between Bread Street and King Street would only allow buses, cycles and vehicles accessing businesses for loading.

However, traffic restrictions in King William Street would allow taxi access, while new seating and green areas would be installed in Cheapside and Old Jewry.

Chairman of the City of London Corporation’s Streets and Walkways Sub Committee, Graham Packham, said: “The changes which have been in place for the last two years are aimed at making the City more accessible so that everyone can feel safe and comfortable as they walk around the Square Mile.

“They are also intended to reduce air pollution and make the City more attractive as it looks to establish itself as not just a global hub of business but a 24/7 visitor destination.

“I’d encourage anyone who regularly uses these streets to take part in the consultation, to ensure their voice is heard before we make a decision on whether to make these changes permanent.”