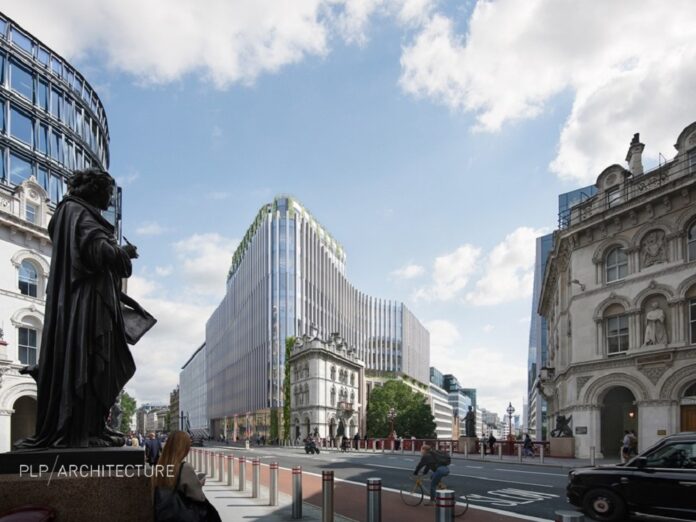 Plans to build a huge office building at an historic site in the City of London have been given the green light.

A developer has won its bid to build an office block on Holborn Viaduct and Farringdon Street, despite concerns about its “enormous” size.

As part of the development, three existing office buildings will be knocked down to make space for a new one, featuring 10 and 12 stories over two levels.

The new block will create 36,000 square metres of office space right next to a Grade II-listed gatehouse south east of Holborn Viaduct bridge.

The building designed by PLP Architects will feature digital screens showing artefacts from the Museum of London and a roof terrace for workers.

The development is being delivered by investment management company Royal London Asset Management.

Philip Sutton, the company’s head of development, said a well-known law firm is interested in the new offices.

He added: “We are thrilled that planning permission has been approved.

“This is an exciting opportunity to regenerate this corner of Holborn Viaduct.

NOW READ: Aldgate tower block gets approval despite fears sunlight will be blocked from homes

The City of London Corporation approved the plans on Tuesday after planning officers recommended it goes ahead.

Christopher Hill, who represents Farringdon Within, said the site needs to be redeveloped but questioned the size of the block.

He said: “It is just enormous and even up against the Goldman Sachs building, which is massive, it dwarfs it.

“Why do we think that’s appropriate?”

He also asked why the corporation’s planning officers were allowing the building to overhang on the viaduct and whether the digital screens would compliment the area.

He said: “Do we really think that’s what we want on Farringdon Street – huge, illuminated panels?”

The City’s Chief Planning Officer Gwyn Richards said staff undertook rigorous studies of the site and are happy with the height and size of the development.

Chair of the City’s Planning and Transport Committee Alastair Moss, said: “This unique scheme embraces the history of the site through the celebration of the Gatehouse, while also providing much needed high-quality flexible office space for the City.

“Schemes which boost vibrancy and accessibility, such as this development on Holborn Viaduct, will continue to help in drawing people to the City for work and play when government guidance allows.

“With a business occupier already expressing interest in the development for its London headquarters, it is clear that the City office market is not only surviving – it is thriving.”

A planning report says the development will improve the setting of the gatehouse.