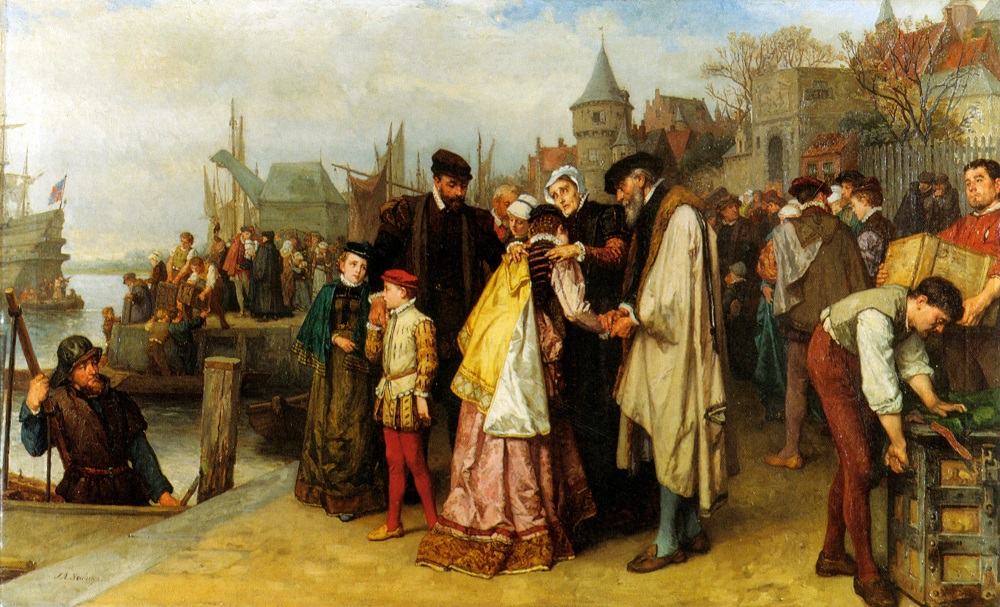 Theo Bosanquet regales us with the history of the Huguenots.

Did you know that one is six of us (myself included) are descended from the Huguenots? These remarkable people, Protestants fleeing persecution in France in the 16th-18th Centuries, originated the term ‘refugee’ and made an immeasurable contribution to the life of this country.

After revoking the Edicts of Nantes – which granted Huguenots civil rights – in October 1685, Louis XIV forbade them to leave France on pain of imprisonment, torture and death. But many took the risk and made the perilous journey, often leaving their families behind.

They travelled far and wide, and around 50,000 came to England. The majority arrived with nothing, just their enterprise, industry and talent, particularly in the fields of textiles, commerce and finance.

In common with many refugees the Huguenots often changed their surnames to adapt to their new country, or were forced to change them due by impatient immigration officials. As a result, many common English surnames have Huguenot roots (eg Andrieu / Andrews, Boulanger / Baker, Barbier / Barber, Delacroix / Cross, Reynard / Fox, Le Cerf / Hart, LeBlancs / White).

My own surname heralds from the Languedoc region, from where a certain David Bosanquet fled in 1685. He became a banker and merchant and settled in Essex; besides me his descendants include the cricketer Bernard Bosanquet, inventor of bowling technique the ‘googly’, and his son Reginald, who became a much-loved television newsreader.

The early Huguenots made an instant impact as they began to practice their expert crafts such as silk-weaving, jewellery and furniture making.

They also brought significant wealth into the country, to the extent that the Bank of England’s first governor, Sir John Houblon, was the grandson of a Huguenot refugee (Samuel Bosanquet, grandson of David, was a subsequent governor).

Simon Le Bon – the lead singer of Duran Duran is the eldest son of John and Ann-Marie Le Bon, a family of Huguenot descent.

Princes William and Harry – the Royal brothers have Huguenot ancestors on both sides of the family, including William of Orange, Charlotte de Bourbon Montpensier, the Marquis de Ruvigny, Viscount de Rohan, Gaspard de Coligny, Duke de Schonberg and the Rochefoucaulds.

Jon Pertwee – the first Doctor Who is a member of a noted theatrical family who are said to come from Pertuis in Provence.

Eddie Izzard – the comedian and marathon man is descended from a Huguenot family thought to originate from the Pyrenees (the name ‘Izard’ means mountain goat).

Charlize Theron – ancestors of the Oscar-winning actress were early Huguenot settlers in South Africa, a popular destination for the Huguenots.

Jessica Chastain – the Hollywood star is descended from Pierre Chastain, a Huguenot physician who escaped to Switzerland from France and subsequently travelled to America.

Notable figures from the past with Huguenot roots have left their marks on spheres ranging from entertainment (Laurence Olivier, David Garrick, Judy Garland) and language (Peter Mark Roget, author of the Thesaurus) to politics (Alexander Hamilton, George Washington, Winston Churchill).

In fact it is no exaggeration to state that the world as we know it would look very different if it were not for the astonishingly widespread influence of the Huguenots.

Their example seems particularly pertinent at a time when refugees are increasingly being disparaged in our politics and media. The Huguenot legacy is a living testament to the positive impact of immigration, even when it comes about by necessity rather than choice. They are an inspiration to refugees and migrants today.

If you would like to explore more of this fascinating chapter in our history, there are several organisations that can help. You will be amazed by what you uncover.

Huguenots of Spitalfields is a charity based in east London, where many of the original Huguenots settled. We are dedicated to celebrating their history and legacy through guided walks and educational events. For more information, visit HuguenotsofSpitalfields.org