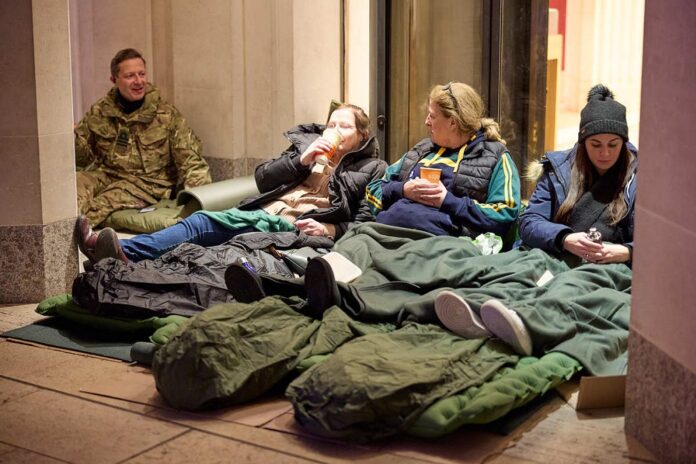 The Lord Mayor and Lady Mayoress of London were joined by volunteers to raise more than £110,000 for charity.

Almost 100 people took part in the Lady Mayoress’ Sleep Out at Guildhall Yard on March 30.

Fundraisers slept outside all night until the morning to raise awareness of homelessness in the City and to raise funds for The Lord Mayor’s Appeal and Spitalfields Crypt Trust.

The event kicked off at 9pm with participants arriving for hot drinks and to choose their sleeping spots, followed by speeches from Lord Mayor Vincent Keaveny and CEO of Spitalfields Crypt Trust, Tony Chasteauneuf.

After a long night, breakfast was provided by The Cook & The Butler before participants headed home.

Ten percent of the net proceeds of the event will be donated to Spitalfields Crypt Trust, an East London charity helping the local community to recover from homelessness, addictions, and other complex needs.

The remainder will go to The Lord Mayor’s Appeal and its beneficiary charities, some of which focus on mental health issues which are often one of the main causes of homelessness.

There are currently approximately 11,000 people sleeping rough in London. This number significantly increased during the pandemic due to a shortage of affordable housing, benefit cuts and cuts to homeless services and charities.