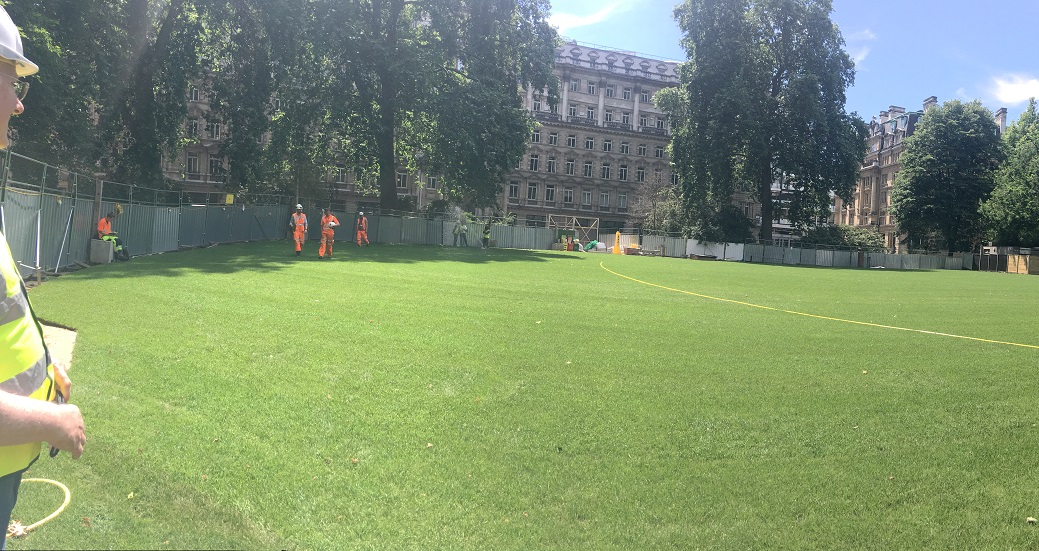 Finsbury Circus Gardens, the Square Mile’s largest open space and London’s first public park, is reopening in August after being closed to the public for 10 years due to Crossrail works.

The City of London Corporation, which owns and manages the site, has announced the imminent departure of Crossrail from the historic park in the heart of the Square Mile.

A temporary lawn will be put in place for visitors, workers and residents to enjoy over the summer while the City Corporation’s design team works on redesigning the space to restore the gardens to former glories.

Measuring just under two acres, Finsbury Circus Gardens is the oldest and one of the most prestigious public parks in the City, receiving over two million visits year.

In March 2010, Crossrail took possession of a substantial part of the garden for a works site to construct its high-speed rail link. The company used the area to access a section of tunnel between Farringdon and Liverpool Street below the park.

Around two thirds of the garden were occupied for the works, requiring the removal of the bowling green and the historic Grade II listed drinking fountain, which has been moved into temporary storage.

In June, the City Corporation launched an architecture design competition to transform the Grade II listed gardens, offering a unique opportunity to be part of the project to reinstate the landscaping and pavilion on the site.

This two-stage competition asked applicants to come up with the most creative and sustainable design ideas to return the park to a multifunctional public space with a pavilion, restore its historic features and transform it into a green sanctuary.

The City Corporation will work with the successful architect to deliver the scheme over the coming year.  Shortlisted applicants will be announced soon.

Oliver Sells, chairman of the City of London Corporation’s Open Spaces and City Gardens Committee, said: “We are delighted to reopen this beautiful garden for the public to enjoy in time for the summer.

“It is a hidden gem in the heart of the City and a site that is of great benefit to so many Londoners.

“People need first-class open spaces now more than ever. We will work tirelessly to restore Finsbury Circus to its original splendour and transform it into a site with flourishing biodiversity, for everyone to enjoy.”

Mark Wild, chief executive of Crossrail, said: “Handing back Finsbury Circus so that Londoners can again enjoy this much-loved green space in the heart of the City is a really proud moment for Crossrail.

“The Circus was a crucial part of our works on the new Liverpool Street station – we constructed a temporary 42m deep access shaft at the site so that the platform tunnels could be dug at the same time as we were building the access down to the platforms from the ticket hall sites.

“It was an incredibly important site for us and has played a really important part in the construction of Crossrail and I would like to thank everyone for bearing with us while we made use of this location.”