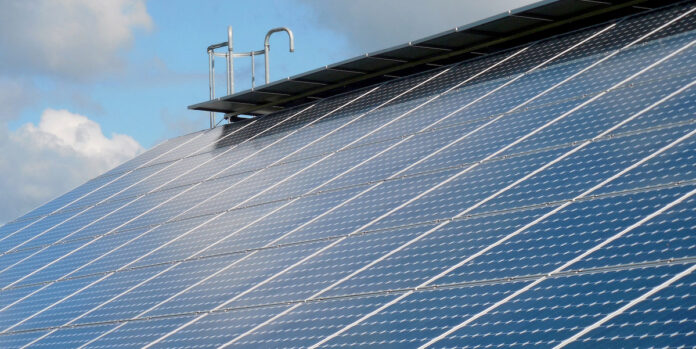 A few months back I wrote about how Portsoken is on the brink of a green energy micro-revolution, with plans to install a large array of solar panels on the expansive, flat roof areas of Petticoat Square in order to generate clean, renewable electricity on the Middlesex Street Estate.

It has already been established that the project is both technically feasible and financially viable.

Moreover, the City of London Corporation has indicated that they like the concept and are keen to be involved.

They have agreed in principle to allow the solar panels to be installed on the estate and, furthermore, that the local authority would then purchase the green electricity generated by the panels.

There’s clearly not much to dislike about a plan to put the dead space of the massive, flat roof to good use.

After all, it is surely better if electricity can be generated harmlessly by capturing energy from the sun’s rays rather than by burning fossil fuels or by using nuclear fission.

However, what I personally think is equally as interesting as the environmental benefits that such a scheme would bring is the question of who would be making it happen.

It is not some large, multinational energy conglomerate that is spearheading these plans for the generation of renewable energy right here on the Middlesex Street Estate. Quite the opposite, in fact.

This is a grassroots project that would be community-led, community-managed and community-owned.

It’s ordinary citizens of the City of London banding together and going into a small-scale energy production business. How brilliant is that?

The idea is that local people will be able to financially invest in the scheme in order to fund the purchase, installation and maintenance of the solar panels to be placed on the roof of Petticoat Square.

As stated, the electricity produced will then be sold to the City of London Corporation at a competitive rate in order to help power communal areas of the estate.

Some of the profits this generates will be used to provide a financial return to the ordinary people who have invested in the scheme.

It is anticipated that there will be a return-on-investment of approximately 3%, dependent on the amount of power the panels generate each year.

Another important thing to point out is that some of the profits will also be ring-fenced for a local community fund, which will specifically be to directly benefit people living on the Middlesex Street Estate.

The community energy scheme will operate as a co-operative, so it will be for the members of the co-operative (i.e. local people) to decide how and where this community fund should best be spent.

Importantly, the bar for participation in the scheme will be low. Local residents will be able to become members of the co-operative by paying just £1. This is significant as it enables people who are interested to become involved in the community energy scheme, irrespective of whether or not they are in a position to invest money into it.

The plans for the Middlesex Street Estate emulate several other community energy schemes that have already successfully been set up to generate solar power elsewhere in London.

Assisting these communities to achieve this goal has been ‘Repowering London’ a charity whose business is to assist local communities to establish and run these cooperatives that generate renewable energy.

Since originally writing about this innovative project earlier in the summer, I’m pleased to
report that things have continued to move forward apace.

This will be the legal entity that establishes the scheme as co-operative, which means it is fully owned by its members and where profits generated directly benefit the members and the local community. Several local people have already been appointed as directors of Aldgate Solar Power.

During the summer holidays, local teenagers attended a workshop at Artizan Street Library where they were given the opportunity to learn more about clean energy production and were taught how to build solar-powered mobile phone chargers.

Attendance was good, pizza was provided for lunch and feedback on the day was positive. On November 2 Aldgate Solar Power and Repowering London will be running the first of their energy efficiency workshops, whereby local people will be invited along to expert-led sessions to learn how to reduce their energy bills.

This will be open to all local residents and the information discussed will be beneficial to anyone who wants some tips on keeping their energy bills as low as possible.

The workshop will be held at Artizan Street Library and will be followed by a second energy efficiency workshop which is planned to be held on 30 November at the Green Box Community Centre on the Mansell Street Estate.

At the time of writing, it is planned to run both sessions between 1pm and 3pm on their respective dates, although this could be subject to change.

Aldgate Solar Power is also looking for a corporate identity.  They need a logo for their Community Benefit Society and local school kids at Sir John Cass’s Foundation Primary School will shortly be participating in a competition to design one, which is great.

It is very pleasing to see that Aldgate Solar Power is now clearly a ‘thing’.  In just a handful of months it has evolved from being a vague concept to now existing as a legal entity.

It’s already successfully reaching out to the local community and engaging with them. Aldgate Solar Power has an exciting, noble vision and, crucially, it has the support of the local authority.

There is therefore no doubt whatsoever in my mind that Aldgate Solar Power will ultimately be successful in securing the required financial backing to get those gleaming solar panels installed on that flat, grey concrete roof.

Nobody’s arguing that one little project like this is going to be able change the world all by itself.

Nevertheless, Britain will have to drastically reduce its carbon emissions in order to reach
the government’s ambitious target of cutting the UK’s greenhouse gas emissions to almost zero by 2015.

Small-scale renewable energy schemes such as the one proposed for the Middlesex Street Estate not only generate money for local communities, but also have a clear place in the national strategy to address climate change.  Again, what’s not to like about that?

Over the next few weeks, local people involved in Aldgate Solar Power will be undertaking a door knocking exercise around Portsoken to introduce themselves and explain to local residents more about their plans to turn the roof of Petticoat Square into an environmentally friendly mini power station. If you can spare a few minutes, they’d love to talk to you.

Aldgate Solar Power also holds monthly meetings at Artizan Street Library from 6.30pm to 8pm. The next meeting is on 14 October, the one after that is on 11 November and the following one is on 9 December.

You would be extremely welcome to come along and speak to local people who are already involved in Aldgate Solar Power and to find out more about this innovative project and, hopefully, to become more involved yourself.