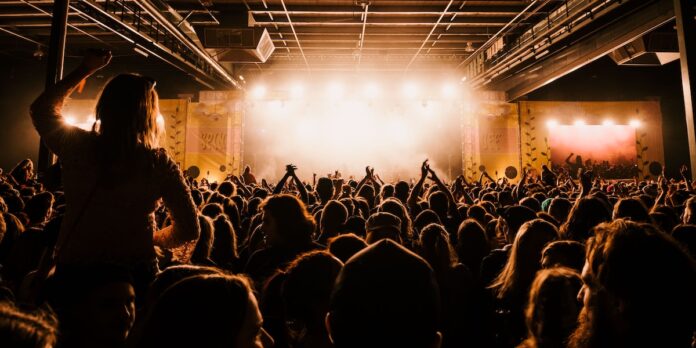 Most of the main museums open up for late night shenanigans on a semi-regular basis, but for two nights, even the little guys are joining in for Emerge Festival.

And the City of London’s cultural institutions are putting on a pretty decent show of their own, from the behemoth arts and culture hub that is the Barbican Centre to the lesser known spots such as London Mithraeum and The Fusilier Museum London.

It’s all in celebration of London’s emerging talent. Hence the name Emerge Festival. For Friday 27 and Saturday 28 September, the City will be open even later than usual for live gigs, performances, DJs, poets and plenty of boozing.

Check out our guide to all the best bits that you can experience with just one ticket. Run from location to location throughout the two nights to get as much alternative fun as possible – discovering some new creatives along the way.

The Barbican Centre prides itself on celebrating the alternative and diverse range of voices within the art world. And they don’t constrict themselves to just one medium either. This makes them the perfect starting off point for the Emerge Festival. They’re running two different City tours – the first being Uncomfortable City. During this tour, they unpack London’s darker history surrounding colonialism, not the glorified version. Alice Porter, The Exhibitionist, will take people on an uncomfortable tour which seeks to break down misconceptions we hold about our own home.

The Alternative Tour seeks to condense two thousand years of history into just one short walk. It talks about all the big London moments, focusing on how it has helped shapes the country’s culture. To understand where we are now and where we’re going, it’s important to see how we got here in the first place. End your Barbican Centre visit with a special viewing of Travor Paglen’s new exhibition From Apple to Anomaly which explores artificial intelligence networks which already exist.

He looks into how they ‘see’ and ‘perceive’ the world around them to try and understand how the biases we input into their programming can be so problematic. For the festival, the exhibition will work alongside Sarah Mayohas’ film Cloud of petals which documents the creation of a dataset of 100,000 rose petals used to train an AI algorithm to generate an infinite series of new, unique petals. Drawing on ideas of post-human realities and the future of labour in the face of automation, this film traces how beauty and subjectivity can become embedded in AI systems.

Once you get your arts fix, wander up into Shoreditch for the Rich Mix’s long list of Emerge Festival happenings. Here, they’re hosting the Hidden Gems Live series. Founded by Leytonstone rapper Lemzi in 2017, the live music event has already made an art of discovering emerging talent amongst London’s rich treasure trove.

Curated by the rap prodigy himself, HGL’s collaboration with Emerge is set to be an electric night of Neo-Soul, Hip-Hop, Trap, R&B, Afrobeats, Grime, Garage and Spoken Word. Taking the stage are Lemzi, Ferns, NYN, Idris Miles and Hype and Fever. Come and discover something a little different here – broadening your musical horizons. This festival isn’t about seeing your favourite artists after all – it’s about finding new ones.

Calling all the wannabe Grammers out there. Or just those of you who really love photography and want to get a few special tips. A special skyline photography masterclass is taking place right up the top of The Monument during golden hour (when everyone and everything looks extra sexy). Fine tune your skills and learn techniques for capturing twinkling lights, colour and movement in the darkening streets and panoramic views of the capital.

This big old famous landmark is also getting involved with year’s festivities, holding their own silent disco in the glass floored walkway. Don a pair of glowing headphones, grab your drinks, pick your channel and choose your side as three DJs battle it out over separate wireless channels playing the best party anthems and dance floor killers. Best not get too drunk at this one though. The transparent floor located over the bridge and Thames may make you a little queasy. It’s all worth it for the views though. We don’t think London clubbing has never had such a cool setting before.

The Roman amphitheatre, located right under the Guildhall Art Gallery, is hosting a set of DJ sets, workshops and even its very own gladiator chill lounge for the Emerge Festival. On the top floor, DJs will be playing tunes all night while the Anthologist serves up a series of signature cocktails.

There’s even a Lego workshop where you can build your own edifice. Because why not? Down a floor and if you’re timing’s right, catch a pop-up talk in the Architecture of London show – where a bit of Roman wall stands casually next to some iconic brutalism, a wee medieval church sits coolly across from the Gherkin.

Take some time with the giant map of Tudor London for a spot of mindful colouring. Then venture even further down to a chillout space in the 2,000 year-old gladiator ring where crowds used to watch wild animal fights, executions and people fighting it out to the death.

This is for the nostalgic retro fans out there. A Wartime Tea Dance will be going on all night on Friday. Party after blackout at the Fusilier’s wartime tea dance in a world of Union Jack bunting, cucumber sandwiches and cake. Learn tea-dance twirling, tango and foxtrot. Then take your new moves to the floor with the sounds of a live swing band.

They’ll help you get into the spirit of things with into the spirit of the whole event with the vintage hair and make-up booth where you can get victory rolls, patriotic red lips, faux fur and polka-dot dresses. Maybe leave this one till the end of the night so you don’t find yourself running about the City, dressed up like a wartime hero.