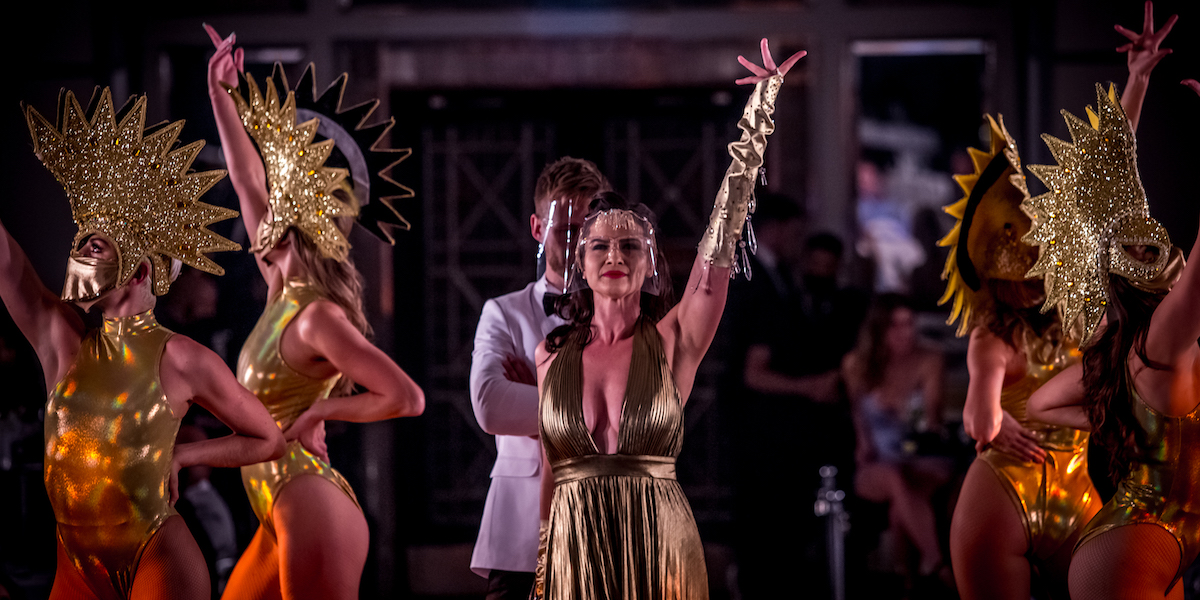 The London Cabaret Club, founded by Evelina Girling and Doni Fiero in 2015, is nestled in the basement of Victoria House in Bloomsbury Square. Arriving on a bitter cold Thursday night in December, we were greeted by the charming doormen, Josh and Callum, who were dressed in fabulous Tuxedos straight from James Bond’s wardrobe and whose enthusiasm was infectious.

Paying great compliments to my large Ushanka, we were warmly welcomed by the crew, escorted down a wide stairway by impossibly dazzling Bond girls, and into a subterranean ballroom where the action began.

The Art Deco fittings of the vaulted space were filled with dry ice. The girls in shimmering dress and boys in classically tailored suits, gave off an impression of being somewhere between The Overlook ballroom in The Shinning and Rick’s Cafe American. If Jack had moved into view arm in arm with Humphrey, we would not have been surprised.

James Bond was omnipresent in the floor show, and entered guns blazing on the raised central stage, surrounded by socially distanced tables, that gave the venue a slightly cavernous feel.

The performers produced an inch perfect rendition of all the greats, Live and Let Die, Thunderball, Never Say Never, Diamonds Are Forever, giving the impression you were watching the opening credits to every Bond film that ever there was.

The performance was a homage to the moves and the poses of the 007 canon, which gladdened the heart, even though the PPE face masks (artfully done) presented an impenetrable barrier between the joy of the performer and the audience. However, that is the world we live in, and these boys and girls went for it. Good for them!

Priced from £65 per person, the show is divided into three exhilarating acts, during which time a three-course meal is served by even more half-clad girls in eye catching dress!

You can choose from a Standard, Vegan and Vegetarian menu. On offer are Ham Hock Croquettes with Piccalilli with Shiso Leaves, or Mushroom and Truffle Arancini with Pea Purée for starters. Mains include, Roasted Portobello Mushroom in a Red Wine, Spinach and Brie Brik Parcels, Tomato and Saffron Essence or Roasted Quail filled with Chicken Mousseline, Dried Fruits, Brussel Sprouts, Sauteed Pears, Confit Potatoes and Port Jus. Finished off with a delicious Chocolate Tart for Dessert.

While savouring this festive feast, the singers and dancers expertly deliver a performance they can be proud of, and despite the mask restrictions, the inner Shirley Bassey came out in the performers, including the Bond boys!

To recapture the cabaret of Berlin pre-war, the odd drag queen stopped between tables, and a classic parrot act performed by a mesmerising magician, not to mention two Las Vegas death-defying roller skates that left you genuinely breathless.

For the princely sum of £65 per head it was a wonderful transportation experience back to the yesterdays of glamour and if you are prepared to dress up a little, and suspend the reality of the PPE, then you too can be a movie star.