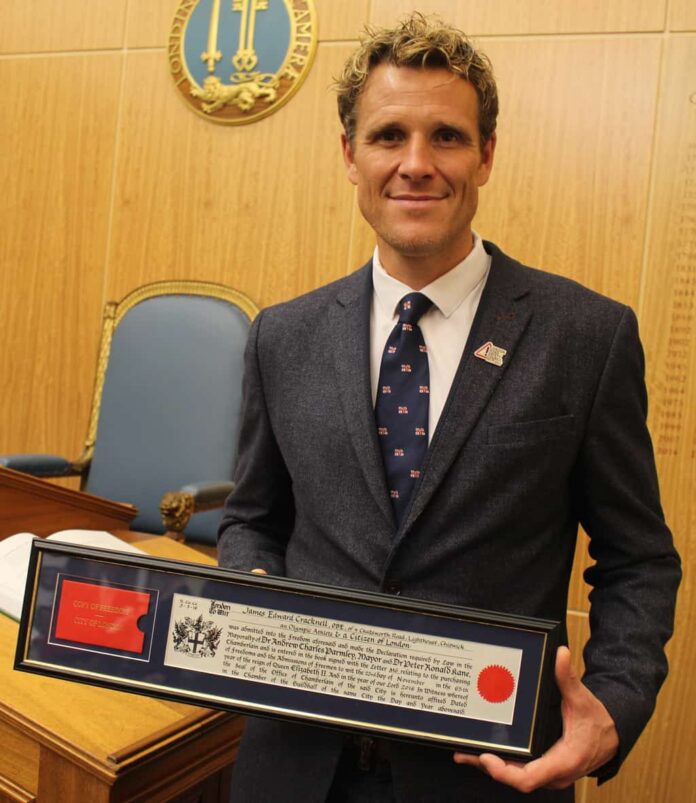 Double Olympic gold medalist James Cracknell OBE has been granted ‘Freedom of the City’ of London for his work on public health and road safety in the Capital.

Following in the footsteps of previous modern-day recipients such as JK Rowling, Morgan Freeman and Dame Judi Dench, Cracknell picked up the honour in a ceremony at London’s Guildhall on Wednesday afternoon last week. “The Capital is my home and a city I care passionately about so I’m very grateful to be presented with Freedom of the City of London.

“The first thing I asked was whether I’d still need to pay for parking and the Congestion Charge – unfortunately apparently I do, although I’m now allowed to drive sheep across London Bridge and get drunk in the city centre without getting arrested so it does have it’s benefits. It’s an honour to be part of such a long-standing tradition.”

Cracknell, who won two Olympic gold medals and six World Championship titles throughout his rowing career, is currently president of the London Road Safety Council, a cause close to his heart after suffering a severe road accident himself whilst cycling across the US in 2010.

He is also a vocal public health campaigner who works closely with The Policy Exchange on obesity strategy. Ever determined to have a positive impact in the community and help to shape public view of sport, Cracknell recently announced the launch of a mass participation running series to help combat obesity in regions of the UK with the highest rates of lifestyle disease.

Started in 1237, Freedom of the City is believed to be one of the oldest surviving traditional ceremonies still in existence in the UK – and even the world. With the title, the Freeman was granted various privileges including driving sheep over London Bridge, being drunk and disorderly without fear of arrest, or, if sentenced to death, being hanged with a silken rope.

Today most of the practical reasons for obtaining the Freedom of the City have disappeared, but it nevertheless remains a unique part of London’s history.