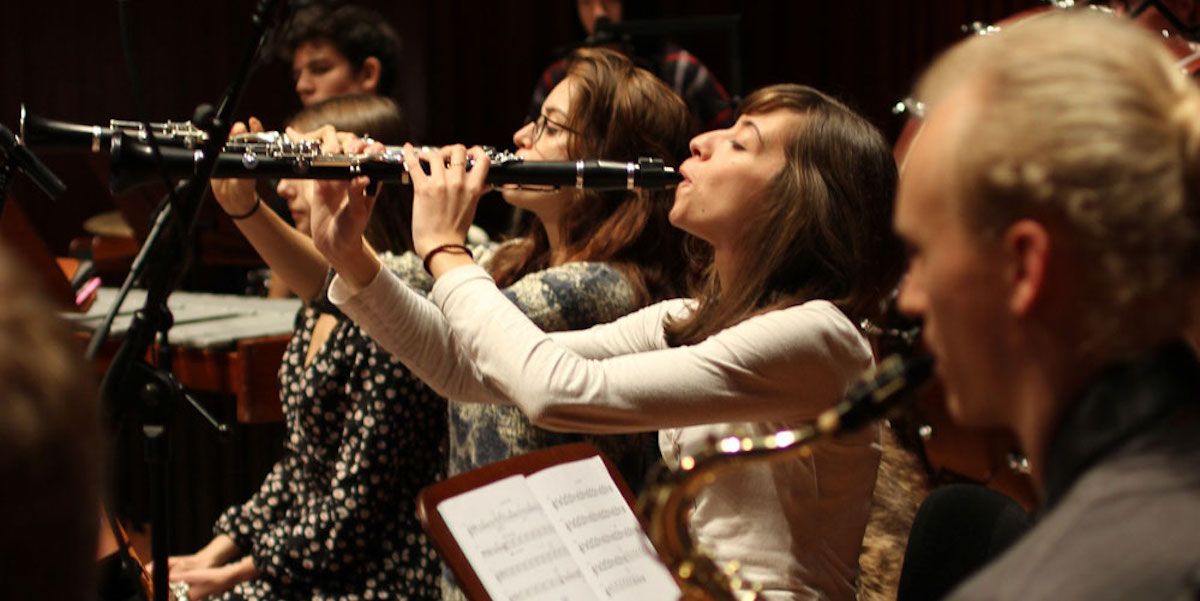 Going to live music events is still off the cards for now – unless you’re able to get some of the few tickets available for socially distanced shows. That’s especially true for those who have a proper love for all things classical music related (even if Barbican Hall is reopening soon).

That’s why we are so pumped to hear about Guildhall School of Music & Drama’s epic online Autumn season of events. They’ve got masterclasses, seminars, concerts and even their Jazz Festival all online during October and November this year. Plus, it’s all free!!

You’ll just need to book slots to ensure the Zoom style experiences don’t crash the system with too many viewers. So, plan ahead and have a night in listening to some superb classical music while all snug in your PJs.

Presented in association with the Institute for Social Impact Research in the Performing Arts, Dr Toby Young (Guildhall School) will be talking with Dr Cayenna Ponchione-Bailey (University of Oxford) about the importance of music composition in helping displaced people find a voice. The Displaced Voices initiative has helped empower the participants to become co-producers of quality cultural works – through the breaking down of cultural barriers between orchestral music-making and their own creative practices – they reported feeling empowered to voice their ideas and emotions in public.

In addition, their friends and families (non-traditional audiences) gained a considerable insight into orchestral performance, whilst the wider audience reported developing a greater ability to empathise with the refugees’ experiences. In this Research Works event Dr Toby Young and Dr Cayenna Ponchione-Bailey will share the findings and challenges of the project and consider how it could be expanded to reach other communities. They will be joined by one of the young refugees to reflect on their experience as a participant, offering a valuable opportunity to engage with a unique young artist and unpack their first experience of orchestral music-making.
19 October, from 6pm, free but booking required

Guildhall’s experimental Ubu Ensemble returns to the stage with a fascinatingly scored, jazzy work by 20th-century composer Bernd Alois Zimmermann. Translated as “Music for the dinners of King Ubu”, it is inspired by the play Ubu Roi by French symbolist writer Alfred Jarry, and displays Zimmermann’s personal ‘Klangkomposition’ style of combining layers of musical material from various time periods. This is a really great alternative to most classical works shown in the Autumn series of events.
Watch online from 7.30pm on 28 October

Guildhall Chamber Orchestra will be led by the much sought-after conductor Joshua Weilerstein, Artistic Director of the Orchestre de Chambre de Lausanne, as he directs a concert of neo-Classical works. Witnessing a Brentano String Quartet performance of Haydn’s Quartet op 77 inspired Pulitzer Prize-winning composer Caroline Shaw to write Entr’acte in 2011. Subtitled ‘a minuet and trio’, the piece fascinatingly weaves eighteenth-century style with 21st-century colours and techniques.Prokofiev’s self-named “symphony in the Classical style” has become one of the Russian composer’s most popular works which has been performed across the globe.

Also modelled in the style of Haydn – with typically Classical orchestral textures and symphonic form – this witty and elegant work is, like the opening piece in this concert, full of harmonic twists which remind the listener of its true century of creation. The evening ends with music from the ballet Pulcinella. The creation of this charming, delicate music – based closely on the manuscripts of Pergolesi among other Baroque and Classical composers – was a labour of love by Stravinsky, who said that “Pulcinella was my discovery of the past, the epiphany through which the whole of my late work became possible.”
Watch online from 7.30pm on 23 October

Clarinettist and founding member of Kansas Smitty’s, Giacomo Smith, joins the Guildhall Big Band to launch their 2020/21 series of performances exploring big band music through the ages. This special concert will feature interviews with Giacomo Smith, Matt Skelton and members of the Guildhall Big Band, as well as a full performance of music from the birth of big band.
Watch online from 7.30pm on 30 October

Watch these live-streamed performances of three darkly comic Italian operas, exploring troubling romantic relationships and escapist fantasies in the interwoven lives of three Florentine women. Susanna is suspected by her controlling husband of having an affair when he smells smoke on her clothes, but is that really her secret in this tale of marital misunderstanding? Silvia is trapped in the luxurious but unfulfilling life of an escort, and longs for the innocence of true love. When she meets the man of her dreams it seems this wish has been answered, but will she follow her heart?

Rita believes she has lost her abusive husband at sea, and now reflects his bullying nature onto her downtrodden new spouse. When the first husband reappears unexpectedly, the two men must decide – who is most deserving of her? Lyrical and tuneful music features throughout these skilfully written, one-act works, which were composed between 1841 and 1909. This new Guildhall production, directed by Stephen Medcalf, reimagines these challenging and thought-provoking stories for the present day.
Watch online from 7pm on 2 November

Head to gsmd.ac.uk for more on the Guildhall School for Music & Drama online events.