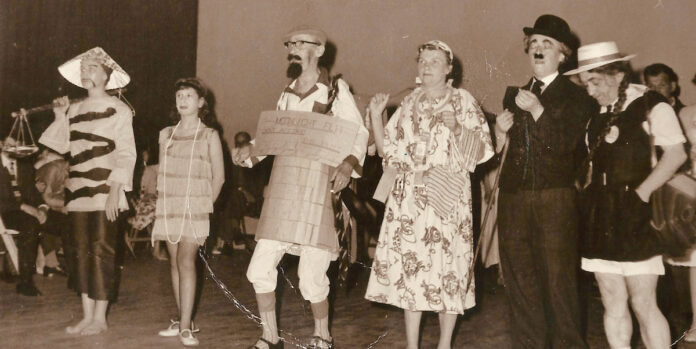 The Barbican’s 50th birthday events went off with a bang, unlike Golden Lane’s 60th, which slipped by quietly. Back in 1959, the estate was still being built. It wasn’t finished until 1962 with the completion of Crescent House, but by then residents of Cuthbert Harrowing and Bowater Houses were already veterans.

There are documents showing what stood before Chamberlin, Powell and Bon laid down the architectural fingerprint that would spawn two of London’s most admired modern housing projects.

This was an area of terraced streets and small manufacturing firms. It was all smashed to smithereens during the German bombing of London in 1940-41 and Golden Lane – and later the Barbican – estates are what grew out of that dark moment in history.

Some of this history went on display recently at St Giles church as part of the @barbican50 activities, including displays from the historical groups ‘A London Inheritance’ and ‘Tales of Cripplegate’, but the ‘People’s Story’ is still a work in progress.

Residents from that first wave of post-war regeneration of London are alive and well here on Golden Lane. They are our treasured seniors, keepers of the golden memories. They are good company, and some of them have even loaned me their private photos and memorabilia to record and exhibit as part of a Golden Lane Estate community archive.

This is a packed, family-friendly free two days of displays, workshops, films and pop-up installations. It will also feature the Barbican Archive Jukebox, a fun way to listen to a collection of audio-visual histories, including one by me about Golden Lane, in which I am embarrassingly pictured as a Roman soldier.

Citizen’s lives are the heartbeat of heritage for the Barbican and Golden Lane estates, and Barbican Archive are keen to enrich their collection and urge residents and workers past and present to bring themselves, their stories, their photographs and their experiences to add to the project.

The archives currently hold dozens of photographs of the devastated landscape this area became overnight on 10-11 May 1941. What they have yet to record are the memories of living people who actually stood on the scorched earth and tasted the smoke.

An invitation appeared on our notice boards recently. It looked to be from an Extinction Rebel, asking us to join a talk in the Sir Ralph Perring Centre about ecology and the climate emergency. Free tea and biscuits were promised.

It was an unconventional invitation – handwritten, neat, but no spelling mistakes or crossings-out. But it didn’t say who it was from, or even if they were an estate resident. It was a mystery. Some suspicious residents believed it to be the handiwork of a cunning criminal fishing for naive victims. Others were intrigued enough to attend.

It turned out to be from a Crescent House resident known for her passionate views. And in an hour-long electric rainstorm of eco facts and figures she told us how man and planet had drifted so far apart that the only way now to avoid population extinction is to change everything we do.

It came with so much energy that the whole of the room seemed to be running on power generated by the people sat in it. Maybe that was the idea.

Being a native Liverpool supporter stuck in the middle of an estate full of Arsenal fans is a cross I have carried for too long, so I recently decided to find a London team to cheer. I was courted by a few lonely Golden Laners from both the Tottenham and Chelsea tribes, and I do have a fondness for Leyton Orient, but none of these felt quite right.

So I have elected City of London FC (established 1931) as my team. Not the senior team, though, who play in the Southern Amateur League (SAL).

Their home ground is in Catford, whereas the CoL FC youth wing train round the corner and play their games across the road from the City’s York Way Estate in Islington. I recently got to see the U9s (Under Nines) play Hackney Borough and the U10s play Hill (from Primrose Hill). In the U10 contest Hill proved to be strong and disciplined.

Their second goal came after a dubious handball (with screams of VAR from adult spectators) and from then on they hit a confident stride. CoL were unlucky not to recover after an early setback, and the eventual 4-0 defeat was not a good reflection of the work they put in.

Hard work did, however, pay off for CoL U9s and they snatched a miracle winner seconds from the final whistle to make the scoreline 3-2. I punched the air and knew instantly I’d found my London team.

Billy Mann lives in Basterfield House on the Golden Lane Estate. He is a teaching assistant, a City of London Community Builder and a blogger. Write to him at [email protected]