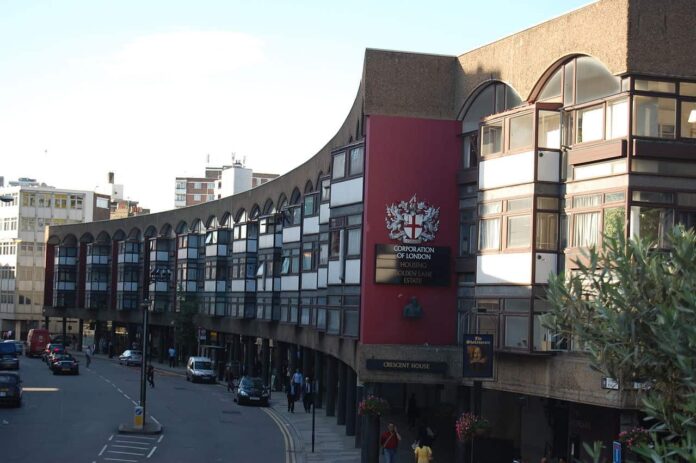 My hometown of Liverpool is famous for many things – footballing greatness, pop music, comedy, the Grand National.

It’s famous also for having two cathedrals: one is ancient, gothic and Anglican, the other modern(ish), metropolitan and Roman Catholic.

Back in the 1980s, PM Margaret Thatcher offered council tenants the right to buy their rented properties, and many on Golden Lane went for it.

The estate thus became a mixture of tenants and owner-leaseholders, hence the two resident associations. It made sense at the time. The issues for the two groups of residents were different.

But slowly their interests (maintenance, cleaning, privacy) came together and the two associations became one – GLERA, the Golden Lane Estate Residents’ Association. GLERA’s standing among residents is split.

Some see it as a helpful negotiator and mediator in matters with the City Corporation; others see it as a self-important talking shop with its head in the clouds.

There’s no joining fee and all new residents gain membership automatically, so there’s not much to lose by tagging along (if interested contact [email protected]).

A sign that GLERA has found its form as a residents’ champion came recently with the launch of its ‘Community Conversation’ initiative.

Crime was the subject for the first meeting and residents got the chance to have frank talks with officials from both the police and the City Corporation about issues such as drug-dealing. Two of our ward councillors also turned up and another from Portsoken to tell us how Middlesex Street residents tackle problems.

It was a great start to a new idea that has the potential to work well for all residents, be they tenants or owners.

Residents of Cuthbert-Harrowing House woke up one Friday recently with hope in their hearts and a spring in their step. The ugly colony of six steel container units that have sat outside their homes for what seems like forever were finally to be removed.

The makeshift village was a fixture of the repair work that is in progress on the estate. The metal modules acted as offices, toilets and storage sheds for the contractors.

The removal of this implanted eyesore had already been signalled twice earlier with optimistic-sounding letters saying that parking on the estate for removal day was banned.

Residents hastily re-scheduled deliveries or risked missing them altogether. Nevertheless, this most recent announcement seemed confidently to predict some kind of closure on what has been a testy time.

Friday morning arrived and silence hovered. By midday a heavy-duty crane-lorry and a flatbed transporter were in place. Men in high-vis jackets buzzed around, preparing to lift the burden of congestion that had festered for so long.

One hour later they were gone, as was their butch machinery, but the six iron boxes stood exactly where they had the day before, and the day before that. A week later residents got another letter stating that the offending structures – by now satirically nicknamed ‘Cans’, as in Cannes – would disappear the following Tuesday.

And when last week they eventually did go, the expected sense of relief and celebration disappeared with them, replaced by the flat feeling that an obnoxious guest had finally gone home.

You’re never far from a quirk of history in the City of London, and one of the quirkiest is the annual wardmote, a strange ritual – outlined in both Charles Dickens’ ‘Sketches by Boz’ and in the last issue of City Matters by my colleague Ian McPherson – in which voters get to eyeball and question their elected representatives, whose honorific title is ‘councilmen’, regardless of gender.

The Cripplegate wardmote takes place in a side room of the Barber-Surgeons’ Hall in Monkwell Square (motto: ‘How Would You Like It Cut?’).

I was pleased this year to hear that most of the residents present were unhappy about the same things as me, and that nearly all of the key issues have been covered more widely in City Matters, and specifically in this column.

The news that I was editorially on the same page as my neighbours allowed me time to explore the BS Hall’s impressive meeting room, its polished wood-panelled walls decorated with paintings of barbers and surgeons from the deep past.

Surprisingly, one was a woman, a dead ringer for Jane Austen. In one corner of this hallowed chamber is a cabinet displaying Tudor surgical instruments.

Among them were sinus forceps, an eyelid retractor, and a tongue depressor, which had a strangely ironic ring to it, given the purpose of our gathering. I returned to my seat feeling queasy and unable to speak for some time afterwards.