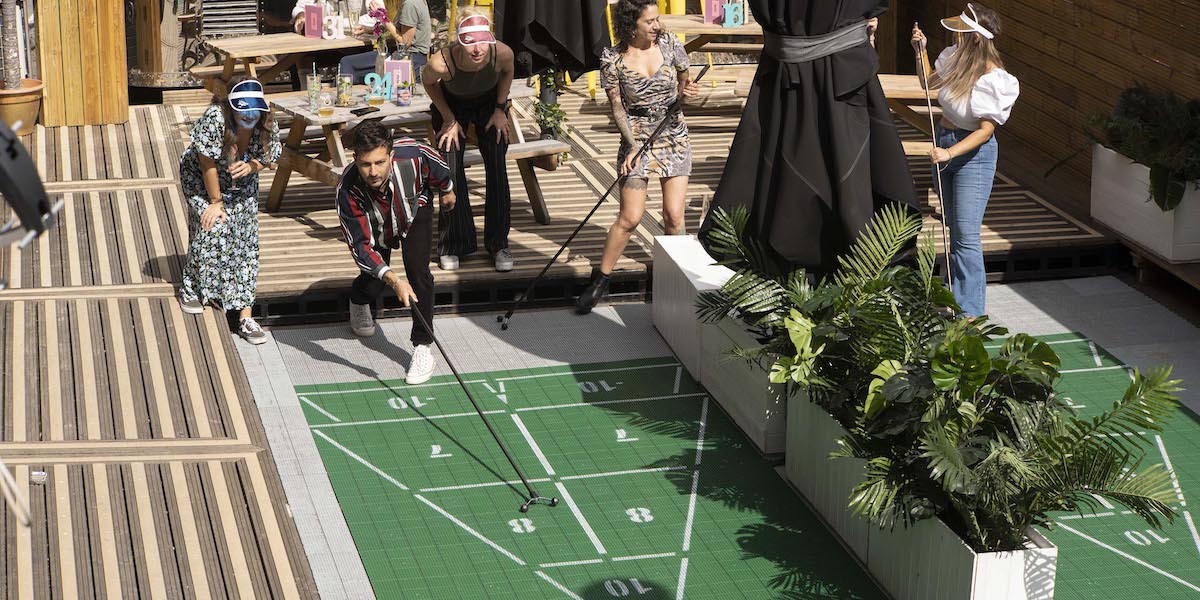 Games bars in the City of London are a new phenomenon, but they are sweet spots to go toe-to-toe with your mates for bragging rights.

From crazy golf to bingo, shuffleboard to darts, and video games to go-karts, there’s a little something for every big kid out there.

So, if you are looking to inject some action into your evenings, check out these awesome games bars in the City of London.

This massive luxury crazy golf space is hidden right by the famous Gherkin tower. They have two bespoke golf courses, with caddies running up and down serving drinks – you order on the green and keep playing while they make up your bevs and bring them over.

Nothing will get in the way of your laser focus. Stay on track to absolutely crush your mate or colleagues. But there’s plenty to do here before and after you play. Apart from the usual golfing, they’ve also got four separate cocktail bars, three street food vendors and five spaces for private hire – just in case the boss wants to treat the staff to a proper night out after work. And it’s all themed too.

Walk around this 1920s English countryside inspired golf club with its elegant clubhouse and rolling greens. Who knew something like this could fit into the Square Mile? Games bars in the City of London don’t come crazier.
8 Brown’s Buildings, London EC3A 8AL

Guys, darts is cool now. I know that might seem a bit dowdy, but Flight Club has converted us. They have three venues in London (Shoreditch, Bloomsbury and Victoria) where they have reinvented darts for the masses. At first appearance, it just looks like your usual glam bar. But it all changes once the pre-booked booths surrounding darts boards fill up with City workers looking for alternative after-work drinking activities.

They gather around a bunch of different spaces both upstairs and down, before letting their competitive sides out through some good old-fashioned darts. But it isn’t strictly traditional. Darts has been given a tech makeover at Flight Club. There are sensors laid behind the cork boards, so the computer knows exactly where you landed, tallying up your points for you – no need for mental maths here.
2a Worship Street EC2A 2AH

London has rediscovered its love for bingo. Pop-up bingo parties have been growing in popularity over the years, gathering a cult following of boozy and ultra-competitive millennials. And now, just a bingo ball’s throw from Liverpool Street Station, the seven-day-a-week bingo hall has reopened.

Dabbers adds interactive game show elements, prizes that are actually desirable, and some great food and drinks offerings. It’s designed to be big and brash. From the moment guests arrive, they will be swept up in an immersive lobby that combines memorabilia with an energetic bar featuring live DJ sets. And the beauty of bingo, is that anyone can do it. This is a truly millennial space, but you’ll see people from all backgrounds visiting Dabbers. They create a whacky and divers community down in this basement bingo hall! One of the best Games bars in the City of London.
18-22 Houndsditch EC3A 7DB

He brought the game to London many years ago by way of seasonal pop-ups at the Old Truman Brewery, but the permanent venue has with eight indoor lanes and the UK’s first open-air shuffleboard court. They have craft beers, slushy cocktails and pizzas to keep your energy levels up, with plans to collaborate with more street food vendors throughout the season. Reservations are recommended, though walk-ins are accepted on the outside lanes and there are private areas for group bookings. Still haven’t sorted the office summer party? Game on.
4 Ebor Street E1 6AW

Where Swingers is a 1920’s themed crazy golf bar, Puttshack is all about the future. They throw all the technology they can into this golfing experience located right by Bank Junction. The whole space is designed to feel like an amusement park. Bright colourful lights fill all the rooms. Dinging noises and music bounce off all the walls. It’s a sensory overload. But in all the best ways. You feel fully immersed in this world of party golf.

And not only do the Puttshack courses create a unique vibe, but unlike any other crazy golf course, they offer a different interactive game at every hole. That means you can be working on your Beer Pong skills at one hole and then test out your pop culture knowledge at their True or False hole. You can’t find this anywhere else.

And there’s no need for paper score cards here – that means there’s no room for cheating. Before you play a round (and drink a round), each ball is sanitised and dispensed with your game profile automatically linked to that ball. It tracks your hits and lets you know who is truly winning. That means there’s more brain power left for hanging out with mates and having fun.
1 Poultry, Queen Victoria Street EC2R 8EJ

We are still obsessed with Otherworld, one of the best games bars in the City of London. This virtual reality bar and arcade in East London is one of the best alternative places to have a Christmas party. Book out the entire space or just a few of their big white immersion pods and escape the world as you know it. They have created an entirely virtual world for people to explore as teams or by themselves while linking people to different third party games too.

Fight off zombies with colleagues, swing through the forest vines as wind blows in your face or simply play the job satisfaction game (if you haven’t had any of that this year). It a whole heap of silly fun. And it is a totally unforgettable experience. They even have their own well stocked bar and small kitchen so all your food and drink needs are taken care of too.
336 Acton Mews E8 4EA

Do you really miss playing Mario Party, but don’t want to buy an old Nintendo 64 just for the occasional fun? Or maybe you desperately want to play the original PlayStation Need for Speed. Well, the fine folks down at Platform have created the perfect place to indulge in these nostalgic games, all the while feasting on pizza and getting around plenty of pints of beer.

Book a table for 2-6 people and go wild on the multiplayer games on offer. They even have a special esports section in the back. The fully kitted out space is your stage to achieve the impossible. Complete death-defying raids, secure nail-biting clutch wins and hold your nerve as the last player standing. These guys are passionate about bringing indie games & esports to a wider audience and can support rookies with advice. You don’t need to be a pro to play here. It’s all just meant to be a whole lot of silly fun.
2B Worship Street EC2A 2AH

We didn’t think we needed an underground martial arts themed gaming bar until we went down to Pimp Shuei in Farringdon. The whole space is decked out like an old school kung fu cinema, filled with original movie posters, vintage TV screens and retro arcade games.

But trying to get a go at the arcade games might not be so easy – they are hot property. Get in early and take turns with your mates, before a line starts to form behind you. But the games are just one of the novelties here. Get around their Asian-inspired cocktails like the Pimp’s Cup cocktail and Bangkok Dangerous for something a little different.
59 Mount Pleasant WC1X 0AY

Now these guys aren’t strictly opening until August, but we can tell that this is gonna be one of the best gaming bars in London once it opens. Think of it as Mario Karts in real life. Drive around a racecourse, kitted out with all the best augmented reality tech.

CHAOS KARTS throws players into this hectic virtual world, living inside a real-life video game to race / battle their friends, family, rivals, colleagues and more. The karts will be equipped with features to produce real life sensations and reactions that will immerse competitors fully into the ride of their life.

The experience comes complete with varying circuit designs, pumping music and most importantly, usable in-kart power-ups and weapons that will allow players to ‘battle’ right up to the finishing line. The future of gaming is here folks. Well and truly.
4 Ebor Street E1 6AW