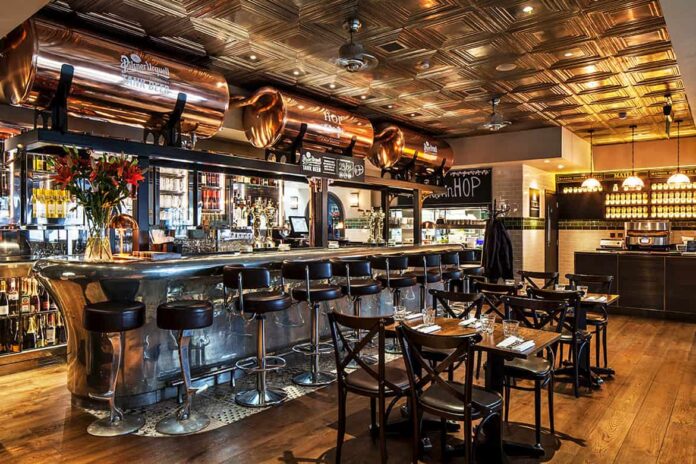 Bars and restaurants in the City have always faced the same problem: how to fill those 48 hours between sun-up Saturday and sun-down Sunday, after 90% of their patronage have fled to the outer boroughs in a puff of #FridayFeeling and social cigarette smoke.

They say the answer never lies at the bottom of a bottle, but London’s favourite chef siblings Chris and Jeff Galvin might have found the one exception for City eateries in the form of bottomless brunch.

Perhaps aware that their chances of luring the smashed avocado-seeking masses south of Shoreditch and Brick Lane on a weekend were slim, they have sweetened the deal with a £10 bottomless option; your choice of unlimited prosecco, Pilsner Urquell or Bloody Mary for two hours.

It’s a good deal, particularly when you consider the majority of the menu hovers between £6 and £9 with only the Full English pushing things into double digits at £12.50.

But will this foray into early morning eats for a group traditionally associated with Michelin-
starred French cuisine and pub grub really lure workers in on their weekends to ‘wind down from the week’?

It would seem that way, if the atmosphere on a gloriously mild Sunday earlier this month was anything to go by; buzzing, but unlike options up the road, mercifully queue-free. As you might expect from a Galvin kitchen (especially one that shares a chef with the much-acclaimed Galvin La Chapelle next door), the dishes are exacting, on the small side, but flavour-packed.

They’ve kept things simple with eggs every which way, buttermilk pancakes and invent-
your-own omelettes and toasties, with smashed avocado (when in E1) and the aforementioned Full English to round things out.

Nothing too groundbreaking, but the omelette is fluffy and packed with fillings, the smashed avocado a solid performer on nutty rye and the eggs Benedict and Florentine sailing by our table produce a few large waves of food envy, especially when their recipients commented, more than once, on the béchamel.

There’s a veritable slew of quality sides and toppings to give each dish your own spin – as has developed into the custom when you’re dealing with grouchy diners with exacting ways of nursing their hangovers.

Being two among them, we opt for the Bloody Marys; a little light on the spice for my preference but were met with two very enthusiastic thumbs up from my companion of the daintier tastebuds.

As with most bottomless brunch offerings, the service does suffer slightly with the addition of demanding groups trying to make the most of their two-hour window, but additional wait times are smoothed over with an apologetic smile.

It’s the cherry on top of a just-add-alcohol approach that will likely have diners coming for the cocktails and sticking around to line their stomachs.