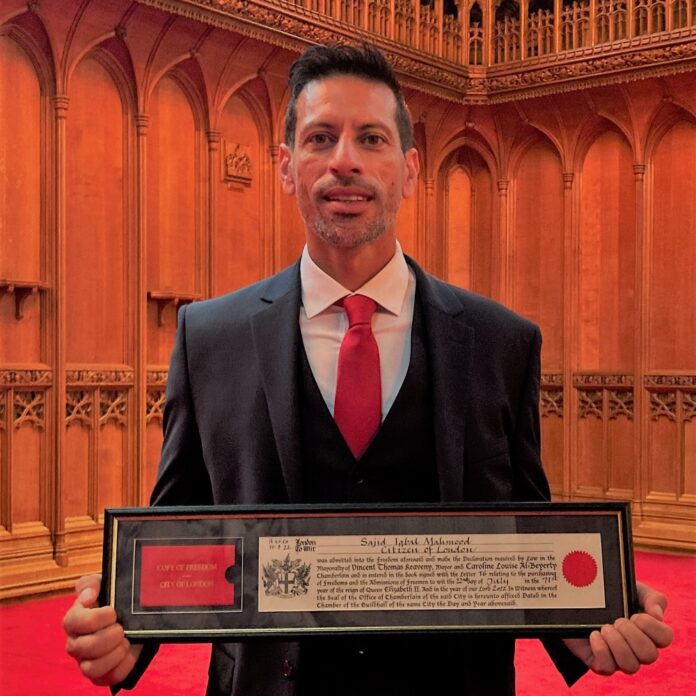 Sajid Mahmood, who played international cricket for England and county cricket for Lancashire and Essex, has received the Freedom of the City of London.

The right-arm fast-medium bowler, who made his debut for Lancashire in 2002 while on a scholarship with the club, attended a ceremony at Guildhall in the Square Mile, with members of his family and friends.

After a successful career, which included making his One Day International debut for England against New Zealand in July 2004, playing in the Ashes series 2006-07, and the World Cup in 2007, Mahmood is now Head of Cricket at William Perkin School and has set up his own cricket academy.

Mahmood was nominated for the award by City of London Corporation Elected Members, Andrien Meyers and Henry Pollard.

Speaking after his ceremony, Mahmood said: “It feels very special to be awarded the Freedom of the City of London for something that is very important to me.

“I have played cricket at the highest level and represented my country and now, my true passion is to help develop the next generation, not just to make them better cricketers, but also better people. In other words, to be recognised for that is truly amazing.

“I now thoroughly enjoy my work as Head of Cricket at William Perkin School and more recently, setting up the Saj Mahmood Cricket Academy, which enables me to help as many young people as possible.

“I would like to thank my family for their continued support because, without them, I would not be in a position in which I find myself now.”

One of the City of London’s ancient traditions, the Freedom is believed to have begun in 1237 and enabled recipients, who were also required to join a Livery Company, to carry out their trade.

Meyers said: “Henry and I were very pleased to nominate Sajid for his Freedom which, not only recognises his notable achievements in cricket at both national and local levels, but also how he is now passing on his skills to young people.”

Pollard said: “Sajid is clearly both honoured and humbled to have received the Freedom of the City of London, of which we are rightly proud.

“He will surely be delighted to know that he is following in the footsteps of other distinguished cricketers, including Sir Andrew Strauss, Michael Holding, and Sir Alastair Cook.”