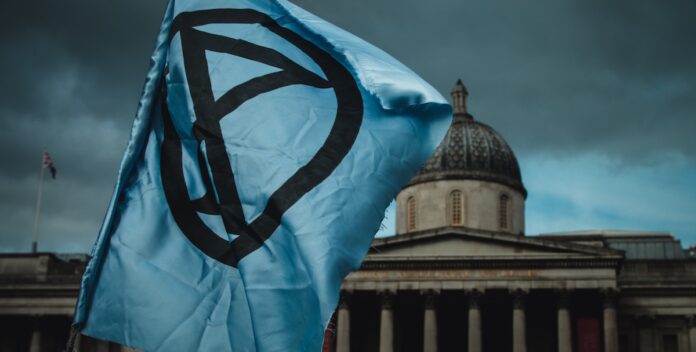 Extinction Rebellion has won a legal battle with the Metropolitan Police against a city-wide ban on its London protest last month.

The High Court found the decision to ban all protest associated with the group not lawful. Extinction Rebellion activists demonstrated in London against political inaction on the climate emergency for two weeks in October.

The government wants Britain to be carbon neutral by 2050, but protestors say change must happen much faster if the effects of climate change are to be stopped. The group’s ‘Autumn Uprising’ targeted Parliament, the City of London’s financial district, and London City Airport.

On 14 October, after eight days of protest, the police imposed a Section 14 Order across London, which banned any gathering of two or more people associated with the Autumn Uprising. Many activists continued to protest peacefully. Over the course of the demonstrations 1,832 people were arrested, and more than 150 have now been charged.

Met Commissioner Cressida Dick said last week that the protest cost the police more than £24million, though the final figure has not yet been calculated.

But judges said the action taken by the police was unlawful because the Extinction Rebellion protests were not a public assembly. This meant the law used to impose the Section 14 Order should not have been applied.

Lord Justice Dingemans said: “Separate gatherings, separated both in time and by many miles, even if co-ordinated under the umbrella of one body, are not a public assembly within the meaning of […] the Act.”

Lawyers for Extinction Rebellion described the conditions as “hastily imposed” and “wholly uncertain, an abuse of power and irrational”.

The Metropolitan Police said it was “disappointed” by the court’s ruling but would respect the result. Assistant Commissioner Nick Ephgrave said the decision to impose conditions on Extinction Rebellion “was not taken lightly” and was deemed “reasonable and proportionate”.

He said: “There is no criticism from me of the decision to impose the condition, which was made with good intent and based upon the circumstances confronting the command team at the time.

“It did in fact result in the reduction of the disruption. Nevertheless, this case highlights that policing demonstrations like these, within the existing legal framework, can be challenging.”

Green London Assembly member Sian Berry said the Met Police had a “pattern” of pushing the boundaries of the law.

She said: “It is really worrying when we see police extending their powers outside law when we’re dealing with something so peaceful.

“Hopefully they won’t push boundaries again, but will police within the law without trying to quell peaceful protest – which is a human right. This judgement might teach them we should be having public debates on how to police London.”

Ms Berry, who is also a London mayoral candidate and co-leader of the Green party, called on the Mayor to do more to protect Londoners’ rights.

She said: “The Mayor could lead that debate and say, ‘Let’s look at this once and for all, which is more important to Londoners, the right to protest or clear streets 24/7’.

“I think they’d say it’s a balance – but on something as important as climate change we have the right to peaceful protest.”

A spokesperson for the Mayor said: “Sadiq has been quite clear that there is a fine balance between protecting the crucial right to peaceful protest, and keeping citizens safe and London functioning.

“On this occasion, the operational decision taken independently by the Metropolitan Police, about which Sadiq was extremely concerned at the time, was the wrong side of that line.

“Following the High Court ruling Sadiq will be seeking further assurances from the Met they will learn lessons from this to ensure future decisions are robust and that they will continue to uphold the right to peaceful and lawful protest.”