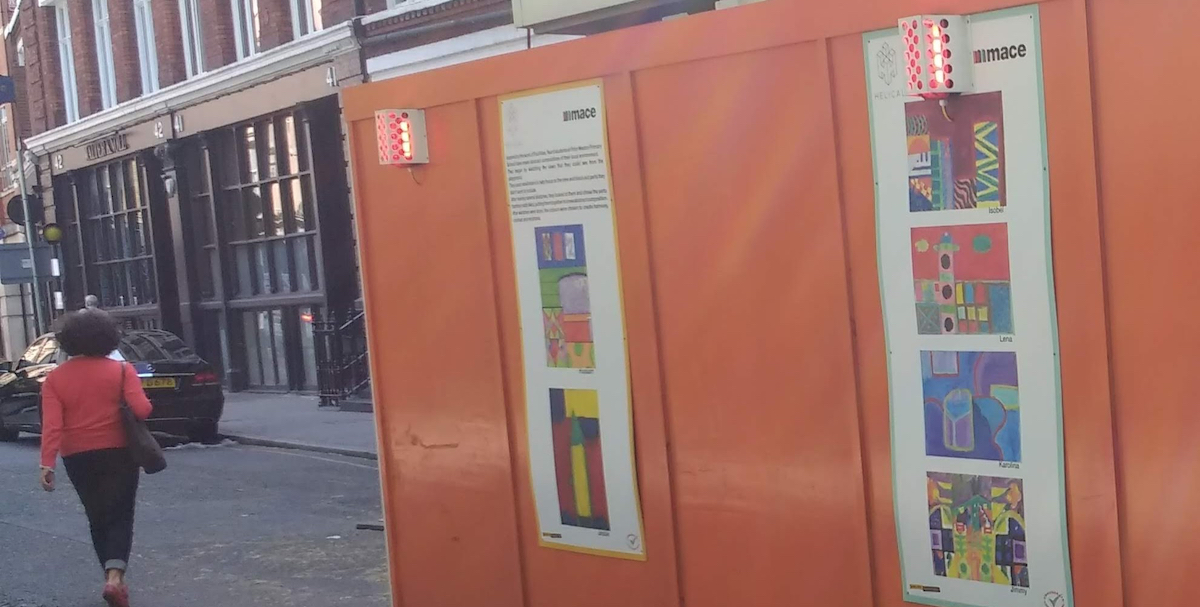 When Banksy sneaked on to Golden Lane that night back in September 2017 and gifted the walls with murals in homage to the late artist Jean-Michel Basquiat, a commotion kicked off.

The City Corporation couldn’t decide whether his handiwork was art or vandalism, spectators stood in long, excited queues to get selfies, and residents jumped straight into a debate on the nature of good taste.

The Square Mile’s prized zero-tolerance of graffiti had been breached and a fuming gang, nicknamed The Scrubbers, demanded cleanliness above culture.

The infamous Banksy artworks are still there today, available to view free of charge, protected by plastic shields. And I suspect even their harshest critics would miss them if they were gone.

For some, art should be in galleries; for others it should be allowed to occupy any available public space, and a strong case for this has been made with a collection of paintings by year six pupils from our local school, Prior Weston, inspired by the revered German-Swiss surrealist Paul Klee.

The pictures are displayed on building-site hoardings in Carthusian Street, opposite the red phone box at Charterhouse Square. Unfortunately, at the moment this is one of the area’s busiest roads, as raging motorists negotiate the warren of rat-runs around the Crossrail developments at Farringdon.

Whether any of them notice the 14 superb multi-coloured images is a good question, but these paintings stand out for their quality, and will remain in place until September.

Prior Weston art teacher Marc Valiquette, a tall Canadian with a bushy beard, looks slightly stumped when I ask him what connects 10-year-old Londoners with Paul Klee, nerdy colour theorist and poster boy for the Bauhaus.

“Mmmm,” he says, rubbing his chin, “that’s a hard question to answer.”

The project is rigorously educational. First the pupils picked a view from the school playground. Then they narrowed their focus using viewfinders and started sketching.

The sketches were pieced together to make compositions and the compositions, once coloured (mainly in acrylics), became the paintings. Each of the vibrant colours has a purpose; some to harmonise, some as outlines and dividers for the bold shapes.

The students eagerly embraced the concept of abstraction, in which the thing you draw doesn’t have to be an exact copy of the thing you’re looking at. This freed them to write their own rules and be individually expressive in their art.

All parents like to think their bundle of joy is a budding Picasso, but in this collection we see the industry behind the artistry, the hard work, the concentration, and the great coaching that elevates the paintings from “Children’s Art” to “Art by Children”.

Another exciting local art project will be unveiled this month. It pairs an audio fairytale written by Letizia Binda-Partensky of Goldsmith’s University and a decorative mural made by the Golden Lane Memory Group under the guidance of artist Madhumita Bose.

The story is about a young boy, bored on a family day out at the Barbican, who escapes his parents, gets lost and ends up on the Golden Lane Estate. Along the way he meets a rich cast of fantasy characters (based on interviews with real residents) and learns some valuable life lessons plus a potted history of the two companion estates.

The mural tells the tale visually in weavings and stitchings in yellow (Barbican) and gold (Golden Lane), all lovingly crafted by members of the very successful Memory Group. The unveiling will take place on 11 June at 4pm in the Golden Lane Estate Community Centre.

The day before, 10 June, marks the start of Creativity and Wellbeing Week, an opportunity to join together and get creative.

Sadly, the City is poorly represented in the week-long programme of activities and events (visit creativityandwellbeing.org.uk for details), but on 13 June at 6pm I will jump on the 243 to Haggerston to help Headway East London’s Chris Miller present a talk about how art has shaped his life after brain injury and the importance of the ‘Discovery Through Art’ philosophy of Headway’s creative hub, Submit To Love Studios.

Miller is notorious for creating his own audacious versions of classic paintings such as Botticelli’s The Birth of Venus, with himself as the centre of attention. Other nearby events worth checking out for Creativity and Wellbeing Week include From The Unconscious Mind, an exploration of art-making and psychoanalysis at the Freud Museum in Chalk Farm (12 June); a session from the Peel Art Group in Northampton Row (14 June); and intergenerational storytelling project ‘What’s the Best Piece of Advice You’ve Been Given’ at the Royal London Hospital, Whitechapel, on 10 June.

Billy Mann lives in Basterfield House on the Golden Lane Estate. He is a teaching assistant, a City of London Community Builder and blogs at scrapbookbilly.blogspot.com. Write to him at [email protected]