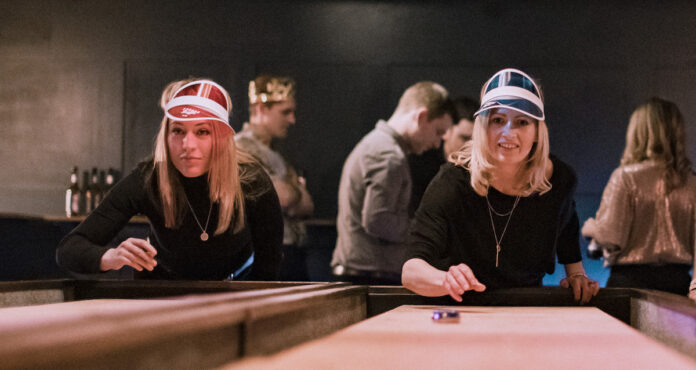 London Shuffle Club in Shoreditch has been around for a while now, offering a huge space for people to drink, eat and play old school floor shuffleboard.

It’s as if you’re on a cruise liner for retirees in the Atlantic, but instead surrounded by hip East Londoners getting boozy with both mates and strangers.

It’s a huge hit for City folk looking to escape hectic work life, play some team games, and let out their competitive tendencies within an appropriate setting.

The long table is made for small groups and has relatively simple rules. Slide your disc along the table and try to land it as close to the other side as possible, without falling over the ledge.

You can even remember the rules when you’re a few cocktails into the evening.

Even without the gaming element, Crazy Eight is still worth visiting. The entire space is made to look like your dad’s old den from the ’80s, with wood panelled walls, concrete floors and neon lights scattered about.

As is necessary in Shoreditch, speakeasy-styled bars, the cocktails here are on point.

They’ve created several signature tipples, including the Hammer Strike, which is made from rye whisky, PX sherry and black walnut bitters – one of our favourites.

You can also order plenty of homemade pizzas from the super friendly staff. They’ll bring it over while you play so you don’t lose concentration.

Because we all need focus when shuffle boarding – this is seriously fun business after all.