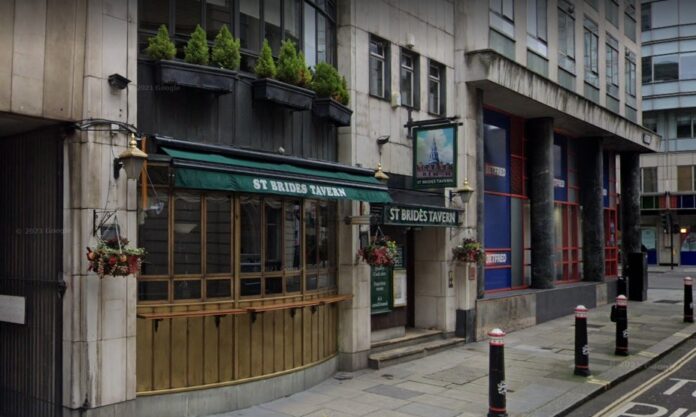 A couple running a “classic London pub” are fighting to keep it from being bulldozed to make room for a new office block in the City.

Husband and wife David and Karen Perkins are battling to protect St Brides Tavern from being knocked down after running the business and living there for 17 years.

Karen and David currently rent the pub from the City of London Corporation. But construction company Fleet House Development Ltd wants to knock it down to make room for a new office building.

If the plans are approved, the pub at Bridewell Place will be fully bulldozed and a neighbouring office block partially demolished to make space for the new set-up.

The new block would be eight storeys high featuring a rooftop with views of the city and a space in the basement and ground floor to serve booze, coffee and food.

Karen said: “We don’t know what our future is. We don’t actually object to the office building being knocked down because it’s ugly. We just want to save the pub. We don’t want to walk away.”

The couple fears they wouldn’t be able to afford the rent at the new site because it would cost them an extra £200,000. They also think there’s more appetite for a traditional pub in the City than a modern watering hole in an office block.

David said: “To walk away from it isn’t going to be easy. To start all over again is really hard.

A petition to save the pub from being demolished has been signed by almost 900 people so far. Dozens of residents and City workers have also written to the City of London Corporation objecting to the plans.

Another East London resident, Julian Faber, said: “The St Bride’s Tavern is a well-established public house, serving a wide variety of members of the public. I’ve used it on many occasions. It’s places like this that make the City of London what it is, and its loss would be a severe blow to the surrounding area.“

City resident Bonita Ince said the pub should stay as it is historically important.
She wrote: “St Brides tavern is a cherished place of congregation for the local community and a beautiful, traditional pub that is a landmark of historic interest to tourists in the area.”

Karen said the support from the community has been “emotional”. She added: “One person who commented online said ‘You come to the pub as a guest and leave as a friend’. We know 90 per cent of our customers by name.”

David added: “We have been humbled by it. We know all their drinks – when they come in they don’t even have to order. We’ve even named some of our drinks after them. They are the reason we are pushing so hard.”

Karen and David have been living in uncertain times for almost a decade with plans for the pub’s future constantly changing. Plans to demolish the pub and entire office block were approved by the City of London in 2014 but were later scrapped.

Since 2017, the couple has been living on a three-month break clause. If St Brides Tavern is demolished, David said they don’t know what they’ll do next as it’s had to start a successful business from the beginning.

He added: “It hasn’t been stable but we have still been committed. The pub when we took it over was a mess and we’ve stabilised it. If they don’t renew our lease we simply have to go.”

A spokesperson for the developer said: “We are very excited about the prospect of revitalising this tired building into a BREEAM Outstanding workplace which has capacity to double the employment numbers offered by the existing property, and in addition to being highly sustainable, will help encourage more and more Londoners back to the City.

“Since Fleet House Development Ltd became involved, it has been working to create a more environmentally and social inclusive scheme by seeking to retain much of the existing building’s structure, refurbish – and unlike the existing consent which proposed the wholesale demolition of the pub, to instead re-provide a modern new pub with frontage along Bridewell Place and New Bridge Street.

“This new space will allow a pub to continue at the location but unlike the current format, provides inclusive level access for customers, higher energy efficiency and almost double the accommodation and service areas to ensure more people can enjoy the facilities. There will also be safer external and service areas provided by way of a new passageway re-connecting Bridewell Place to Bride Lane.”

Both the pub and office block were built in the 1950s, according to a report by building consultants KM Heritage. The report also said the wooden bay of St Bride’s Tavern “broadly emulates the proportions of a 17th century London townhouse” but in reality, it “has no physical heritage value at all”.

Despite this, Karen and David think the pub does have an important history and serves an important role as a place for locals and workers to socialise. David said: “It provides a place of social community value to everybody that has to go to those quiet offices.”

The Corporation’s planning committee will decide whether the plans go ahead in due course. The City of London declined to comment.