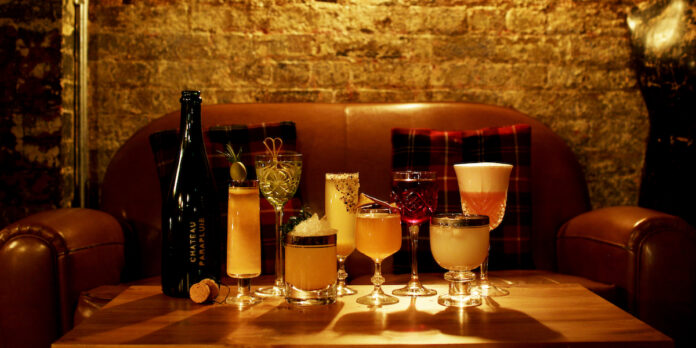 Cocktail bars like Discount Suit Company are hard to find in the Square Mile. And, as it doesn’t really have any signage, it’s not the easiest spot to find itself. It a hidden gem on the border of Spitalfields and Aldgate.

Head down the stairs below an old suit store and through a black curtain to find this busy drinking den. It feels like a secret prohibition bar although they certainly aren’t leaning too hard into that feel. It’s far from being a themed bar.

That’s what’s so appealing about it. Discount Suit Company really is just an honest and good bar. It’s noisy, relaxed, and full of local workers hanging out. No one is trying too hard here – and that is an all too refreshing atmosphere in London.

Grab a seat at the bar, around a big table or on one of the leather sofas and get into their short but top-notch cocktail menu.

They can whip up just about any classic cocktail you fancy but you come here something a little different. Something special.

For us, the number one cocktail has to be the Baker’s Dozen. The base spirit is Bán Poitín, a small batch Northern Irish whiskey distilled from potatoes, malted barley and sugar beets. It has a really unique bready smell and taste which is paired well with their bakers’ syrup, El Bandarra Vermut (vermouth), citrus and bitters. Definitely give this a go if you’re into something like a white Russian or espresso martini.

The Doodlebug is another big win – think Negroni with whiskey instead of gin. Well, sort of. The bartenders compared it more closely to a Boulevardier or Godfather. It’s made with Woodford Reserve whiskey, Campari, Palo Cortado and chestnuts – and boy does it pack a proper punch. They don’t hold back on the booze in these bad boys.

But if you want something to taste a little lighter then go for their tall cocktails. Either the Cockney Touch or the Whipping Boy will satisfy. But being light doesn’t mean they are void of alcohol – they will all get you tipsy after just a few.

Moreover, while they could charge big bucks for cocktails in this area, they refuse to do so. Each cocktail goes for just £8.50. That’s almost unheard of in this area. Especially for drinks of this quality. Discount Suit Company is all about making good cocktails accessible to all.

And they even brew their own cider and alcoholic ginger beer, so you don’t have to go too hard with all the liquor on a weekday night if you’re wanting to be properly productive the next day. Pairing the drinks with some of their snacks will help with that too. Grab some olives, a cheese and meat board and some fresh hummus and you’re sorted.

But be sure to book a table before you go because they often run out of space early on. The hidden bar isn’t quite as secret as it used to be – and it isn’t hard to see why.