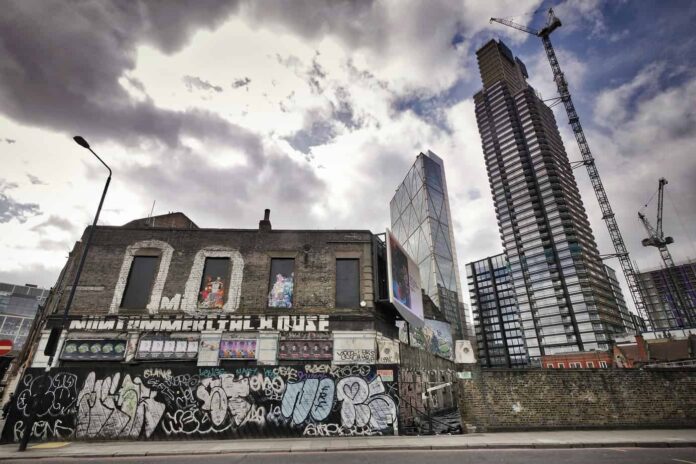 It’s difficult to engage in any discussion of Shoreditch without first acknowledging the g-word.

Over the past 10 to 15 years this former textile manufacturing hub to the north-east of the City has become known almost universally throughout London as ground zero for gentrification; a geographical and cultural melting pot of monied Islington, hipster Hackney, and the steely gaze of the City.

Crumbling warehouses have long been snapped up and converted into hip co-working spaces, derelict blocks are now home to high-end developments befitting its position barely a block from the gleaming towers of Bishopsgate, and any available space has a food truck parked across it.

But what began with dismay over the East End ‘losing its edge’ has moved on to grudging acceptance, and even celebration.

Nowadays, Shoreditch is the proud poster child of gentrification, home to an unrivalled stock of restaurants, bars, boutiques and galleries that has seen Shoreditch unseat Soho as London’s cultural and culinary heartland.  Just don’t call it ‘up-and-coming’, we’re well past that.

Industrial conversions and new builds make up the bulk of the offering in sought-after south Shoreditch, where proximity to Redchurch Street’s mix of achingly hip boutiques and restaurants and the convenience of Liverpool Street station have sent prices skyrocketing.

Ben Ainsworth from Knight Frank says the Victorian flats in and around the Boundary Estate, some of London’s first social housing, are always popular, as are character-filled warehouse conversions as our love affair with New York loft-style living continues.

Long & Waterson is a new scheme of 119 flats in a pair of converted 1950s workshops and a new building connected with a series of landscaped podium gardens that were inspired by Manhattan’s iconic Highline Park. Prices for a one-bedroom flat start at £675,000.

“Buyers love anything with a bit of history – that’s what attracted people to the area in the first place,” he says. “The conversions offer more character than a new build, but also a lot of versatility; open-plan spaces that can be used for work, play, sleep, cooking – it’s a very different perspective in living.”

Prices drop the further you venture up Kingsland Road, where a two-bedroom ex-council flat in Hoxton will set you back around £400,000. Houses are few and far between, save for a smattering of Victorian terraces around Columbia Road and Georgians in nearby Spitalfields.

The cafes in Shoreditch might be full of millennial hipsters but Ben says the property market is dominated by well-to-do workers in finance and tech who seek a cushy pad in a cool location within Tech City’s broadband network.

“You’re a 10-minute walk from ‘Silicon Roundabout’, but it still feels very much like a local community, which is important to a lot of workers.”

And now, even more overseas buyers are beginning to ask for the WiFi password.

“Where buyers from Asia and the Middle East and Russia would have traditionally gone for Belgravia or Mayfair, we’re now seeing this huge influx of people looking to the east for better value for money and closer proximity to tech, which is where all the wealth is.”

Old Street is on the Northern line, while East London and Canary Wharf is easily accessible on the Overground from Shoreditch High Street station. Kingsland Road is serviced by multiple bus routes.

Designers seldom seen on the high streets have taken up residence in Redchurch Street alongside quirky homeware stores and independent labels to create a microcosm of style. On the other side of Bethnal Green Road, Boxpark’s cluster of shipping containers are home to youth-oriented fashion brands and gift shops, while Brick Lane’s vintage shops still harbour the occasional gem if you’re prepared to do the time.

Sundays are best spent at Columbia Road Flower Market – brave the hoards of social media snappers and bag yourself a few bunches of blooms at rock-bottom prices.

Where do we start? Dining options in Shoreditch run the gamut from salt beef bagels at any hour of the day or night from Beigel Bake in Brick Lane right through to Britain’s top ranked restaurant, The Clove Club in Shoreditch Town Hall.

Popolo on Rivington Street is a top pick for Italian small plates, Smoking Goat is doing a new take on Thai, while Smokestak is regarded with reverence among carnivores for authentic Texan barbecue.

Out of towners might come for the pubs and clubs that turn Old Street into something resembling the Vegas strip every Friday and Saturday night, but there is plenty more to Shoreditch than partying and, in classic East End style, it’s usually found down an alleyway.

And for proper people watching, you can’t go past the rooftop pool at private members’ club Shoreditch House, if you’re lucky enough to be on the list.