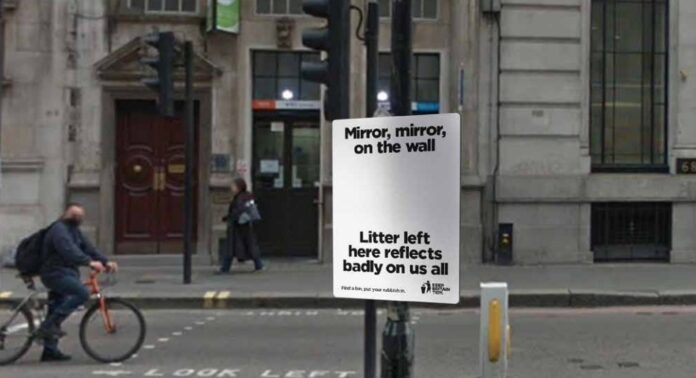 A new campaign will force litterbugs to look themselves straight in the eye when they discard their rubbish “carefully”.

The “careful littering” phenomenon is one you’ve probably heard of – but now you think about it, are you guilty of it?

The City of London’s clean-up crews have noticed an odd behaviour whereby Londoners appear to think if they place their cigarette butt, newspaper coffee cup, or sandwich wrapper very tidily on a ledge it doesn’t really count.

And it appears there’s a lot of us doing it.

The City Corporation’s environmental campaigns manager, Adam Collins, says in one year the council estimated that six million cigarette butts had been discarded in the Square Mile financial district alone.

The Keep Britain Tidy campaign, run in partnership with the Corporation, is focused on “careful” littering in areas like Tube stations or in shops, and along streetside ledges.

“The main thing about this campaign that we’re trying to focus on is ledge, or what we call ‘careful’ littering. When people place something on a shelf they don’t necessarily think of themselves as ‘littering’, as they do it so carefully,” Mr Collins said.

The campaign will see mirrors put up in known “grot-spots” bearing the tag-line: “Mirror, mirror, on the wall, litter left here reflects badly on us all.”

Mr Collins said the Corporation spends a lot of time and money keeping the Square Mile clean, and with 400,000 people passing through the financial district every day it only takes a small number to trash the streets.

“It actually really changes people’s perceptions of the area. It only takes a tiny minority – a half a percent – to leave a coffee cup,” he said.

The campaign is designed to tap into the selfie age where “image is everything”, by trying to drive home to people that in today’s increasingly environmentally-conscious age, littering can actually have a negative impact on what others think of you.

The mirrors will be installed in Moorgate, outside London Metropolitan University; at the Royal Exchange; and in an area of Cheapside near St Paul’s station from mid-January through February.

Port health and environmental committee members on 15 January welcomed the campaign, but pointed out that some Londoners might argue they litter because there are not enough bins in the central areas of the City.

“I know there’s a reluctance to pay to have bins and have them emptied. But people go to a meeting – have a sandwich on the street – they can’t take it in. If there’s no empty bin they’ll leave it somewhere,” said Deputy Wendy Hyde.

For every 50 bins a crew costing £70,000 a year is required to maintain them, not including the cost of cleaning and maintenance around the bins.

Mr Collins later added that he hoped City businesses would think more about their own facilities.

“Most places have receptions in their businesses, that’s where better quality recycling comes in,” he said.

“If people could take their litter to their office and recycle it, that would be great.”