A massive new skyscraper with 25 levels of vertically-planted greenery looks set to be built in central London.

The 35-storey tower will be built at 50 Fenchurch Street, beside the growing cluster of tall buildings in the Square Mile such as the Walkie Talkie and the Gherkin.

It will be built by The Clothworkers’ Company, which dates back to the 16th century, and is one of the many historic livery companies that form the City of London’s business community.

Its “expansive green facade” will be created using bespoke metal planters that will provide support for climbing plants on the tower’s south, north and east elevations.

The new skyscraper will include:

Unusually, the development will also provide a new home for a grade II-listed church crypt within the site’s basement. 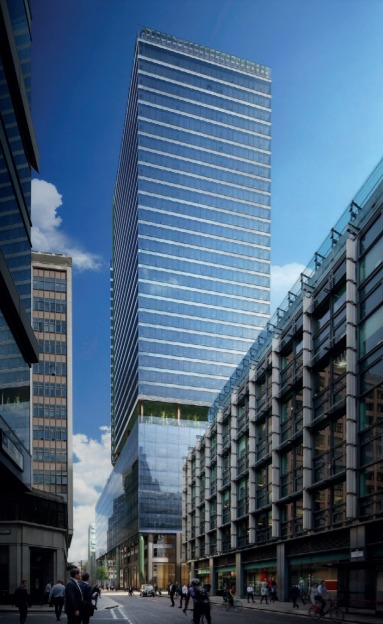 Planning documents say that Lambe’s Chapel Crypt – originally the crypt to a 12th century chapel in Monkwell Street – will be rebuilt beneath the new development.

The crypt has long been inaccessible to the public, after it was rebuilt in the 1820s and demolished in 1872. It was then: “Reordered in the All Hallows Staining churchyard. Only half the Crypt, then existing, was recreated and the elements used were not rebuilt correctly.”

The new public square will be placed around the 12th century All Hallows Staining tower, which survived the Great Fire of London despite its church hall collapsing.

There are also plans to build a new Livery Hall and offices for The Clothworkers’ Company underground. The Company has been based at the site since 1528, though in a succession of different buildings.

Planning permission was given by the City of London Corporation’s Planning and Transport Committee on Thursday, May 14.

Committee chair Alastair Moss said: “The City of London Corporation is proud to support world-class development – creating more great spaces for the people who work, visit and live in the Square Mile.

“We hope this new building will provide an example of sustainable development fit for future generations, as the City continues its pattern of sustainable growth.”

The scheme was designed by Eric Parry Architects, who also worked on 1 Undershaft, a 73-storey square-shaped tower that’s currently being built in the Square Mile.