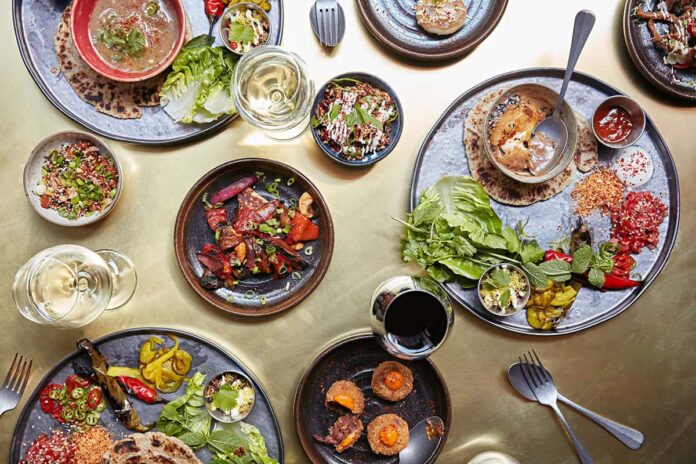 And with the chorus of critical acclaim still ringing his ears, the chef moved quickly to make his mark on the City, opening a second site within 12 months of the first.

It was a welcome, if not exactly surprising, move given the Square Mile’s reputation as fertile feeding ground for carnivores, and Rankin’s contribution to it in Devonshire Square favourite Pitt Cue and Moorgate’s now closed Smokehouse.

But the surprise was saved for the next announcement; Temper City would be eschewing its tried and tested Mexican and mezcal flavour formula in favour of a newfound focus on curry and gin.

So it was with great interest that we ventured into the so-new-there’s-no-phone-reception Angel Court development last week to try out this restaurant that looked like a Temper (huge central kitchen with open grills) and sounded like a Temper (’80s and ’90s bangers, full blast) but might not taste like one.

An eclectic menu kicks things off with Korean haggis that arrives packing some serious heat in a tomato base and served san choy bow-style in baby lettuce cups.

Seafood is well represented in the form of a wonderfully light crab beignet (below) and squid and samphire pakora, but Rankin’s roots shine through in a bread-crumbed and fried melt-in-your-mouth mutton roll.

Mains are delivered by way of either a curry pot or one of the monster grills and tandoor ovens smoking away behind the kitchen counter, and are presented on the menu accordingly.

The former runs the gamut from dashi chip shop chicken – a thick dashi-based curry over smoked chicken inspired by the 2am staple – through to dry goat; generously spiced and falling apart.

The grill and tandoor churns out goat chops, duck, lamb and sirloin in a style that might be a little more traditional Temper – if indeed a 10-month old restaurant can lay claim to ‘traditions’. It’s still all on theme treated with tandoori and red and green curry flavours, though the lamb skewers slathered in kimchi sauce are a standout.

For loyal fans of the curry and beer combo, Temper’s suggestion of gin might be a little hard to swallow.

In reality, it’s actually a winner, the gentle sweetness of the gin cutting through and complementing the fragrant spices.

The 25-strong list comes in the form of colossal bowls of gin and expertly paired tonic or as a more sedate looking but equally lethal martini. If you’re still unconvinced, get stuckinto the far-reaching list of new world wines with a drop to suit all geographic and financial preference.

A Temper staple, the wine list is one of the few things on the menu that has made the trip from Soho to the City, travelling up the Central line accompanied by copious amounts of that Monster Munch sprinkle and Neil Rankin’s ability to serve up yet another winning restaurant.