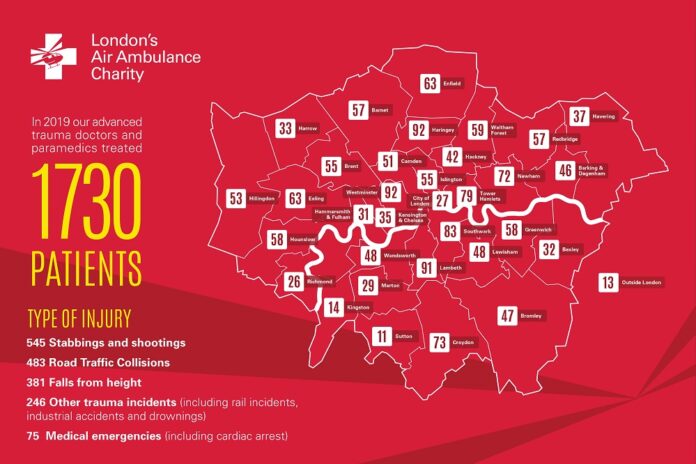 New data released by London’s Air Ambulance Charity has highlighted an increase in patients attended to in 2019.

The charity supports the pioneering service delivers life-saving treatment to the 10million people who live and work in London, bringing the hospital to the scene to deliver urgent medical care when every second counts.

In 2019, the charity’s 30th anniversary year, the helicopter and rapid response cars took an advanced trauma doctor and paramedic to 27 patients in City of London whose lives were on the line, 10 more than in 2018.

Across the capital, London’s Air Ambulance treated 1,730 patients – an increase of 74 more missions than the previous year, at a cost of £2,080 to make each mission happen.

Our charity helps to treat an average of five critically injured people every day. We can only do so thanks to your support. Find out how you can get involved: https://t.co/P90PPUPTgf pic.twitter.com/fycI0mnXdK

The data shows that the busiest boroughs were Westminster, Haringey and Lambeth. Nearly one third of injuries were from stabbings and shootings (32%) or road traffic incidents (28%) and one fifth due to falls from height (22%).

London’s Air Ambulance has a world class reputation for delivering clinical innovation and pioneering treatment at the roadside and is known for using new technology and treatments to bring the most innovative care to the people of London.

Treatments now delivered by the team on-scene include pre-hospital REBOA, to help patients suffering serious internal pelvic bleeding, and carrying blood on board, resulting in significant drop in number of patients bleeding to death before reaching hospital. 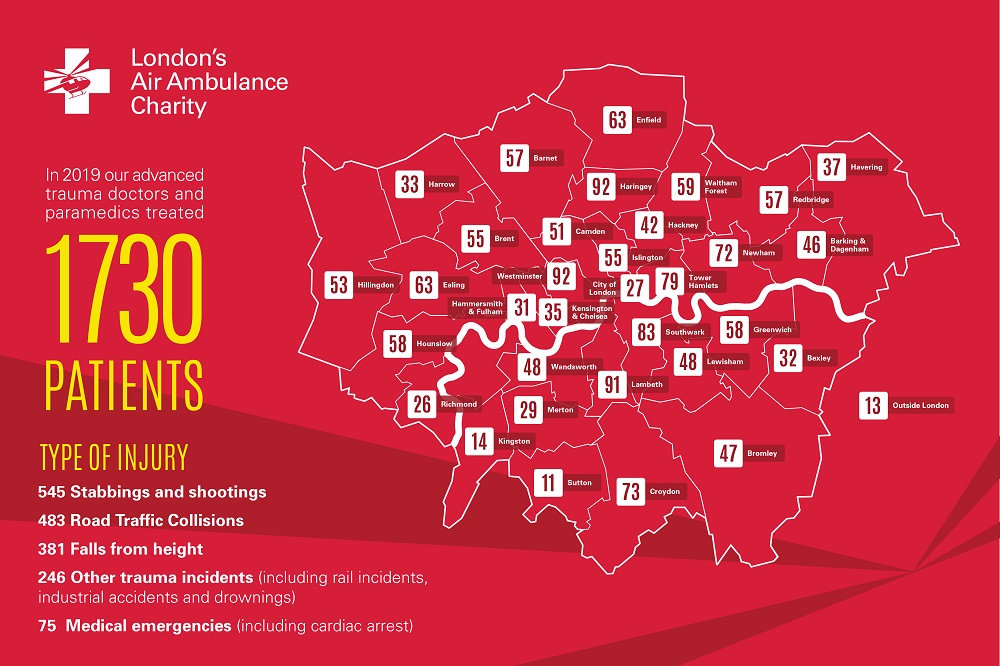 Barts Health NHS Trust provides the doctors, some financial support and the helipad facilities at the Royal London Hospital.

The London Ambulance Service NHS Trust provides the paramedics and the emergency infrastructure to dispatch the service 24 hours a day.

In 2019, London’s Air Ambulance started working with ‘GoodSAM instant on scene’ – a technology that enables the London Ambulance Service Paramedic in dispatch to live stream video from any 999 caller’s mobile phone camera, to get ​on-scene video footage to see the patient, instantly locate the caller and to provide life-saving advice.

It has been used by the service 134 times by since October 2019 and is helping to quickly understand a patient’s injuries and to provide the best treatment, ensuring London’s Air Ambulance is dispatched to the right person in the quickest time.

“We have a proud history of pioneering new ways to save lives and have developed ground-breaking treatments that mean people who would have died at the scene of the incident a few years ago are now surviving.

“Sadly, there are still some patients whose injuries are so severe that they don’t survive. That’s why we are committed to investing in research and development and collaborating with our partners to find new techniques and treatments that can create more survivors in the future.”